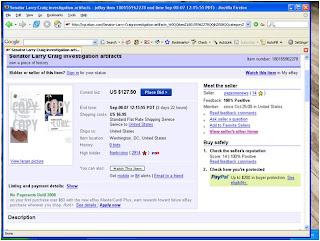 Wow - looks like Mike "the Gay Avenger" Rogers has hit the big time with a profile in the Washington Post. Those of us who have followed politics know all about this toad. Rogers gleefully acknowledged back in October 2006 his role in outing Rep. Mark Foley.
"I can say this. I had the emails before they were on the net. Additionally, I had the additional emails, written by the page to a friend. The story was being written by a number of outlets and I provided additional information to reporters involved in the breaking of this story. Was I the central figure in reporting on Foley's latest scandal? Never said I was. Was my work on the case important to helping make sure it came out before the election? Yes."
Fact is Rogers had been after Foley for 3 years prior to his getting Brian Ross to play his little bitch...
"I don't actually call it outing. I call it reporting," explained Michael Rogers, whose Website has reported on Foley's homosexualuity for three years. "I put it there because Foley had a record that was against the gay community. He refused to denounce his vote on the Defense of Marriage Act. It's not about being gay. It's about the hypocrisy."
I call Bravo Sierra on that. This is all about not following the gay agenda. Forget the fact that the Congress people are voted in office to do the bidding of their constituents. If the majority of the constituents don't want to redefine the word marriage, then that is how the Congress person should vote - regardless of their personal position. If they can't do the bidding of those that put them in office, then they should resign. Not because some little self-prescribed gay activist issues a Gay Fatwah.
Even worse than his campaign to destroy people for his own personal 15 minutes of perverse pleasure, Rogers is on record as admitting to attempted blackmail Sen. Larry Craig during the Alito confirmation hearings. Yes my friends - this asswipe admitted it.

Tomorrow you will decide if your political position is worth more than doing what is right for others like you. For others like you, Mr. Senator, who engage in oral sex with other men. (Although, Mr. Senator, most of us don't do in the bathrooms of Union Station!) Your fake marriage, by the way, will NOT protect you from the truth being told on this blog.

I posted on it, Sweetness and Light posted on it as did many others. Just like Mark Foley, Rogers had it out for Sen Craig for several years. Craig was his target and come hell or high water, this jerk was going to take him down.
And now the WaPo decides that this blackmailer is someone that those on the Hill should be afraid of? PUHLEEZE - this cockroach should be in jail for blackmail. I guess I should be grateful to Jose Antonio Vargas for exposing this scum to the world. I wonder if Rogers was outting gay Democrats would he be put on a pedastel or villified. My money is on the second option.
And this is probably the best part... This scum is selling his "investigative articles" used against Sen Craig on Ebay. That's a screen shot of the Ebay page pictured above. Here's some of the text Rogers included in his auction for Item # 180155962278... (MEGA hat tip to Retire05 in the comments at Patterico today)
"Faced with charges of lewd conduct in a men's bathroom at the Minneapolis, Minn airport US Senator Larry Craig pulled out his business card and asked the arresting officer 'What do you think of that?"
"Now the blogger who first outed Larry Craig for his men's room activities is selling Larry Craig's business card along with other artifacts from the case..."
Yeah - this is nothing about partisanship or homophobia (spit - spit - spit)
Rogers is quoted in the WaPo as claiming it was all about "Hypocrisy. Plain, hate-filled hypocrisy". At least he got part of it right - Hatred is the name of the game. But more like a personal hatred I think.
Funny Rogers neglected to answer Mr. Vargas' question about his own personal life...
Vargas -"Has he ever had sex in a public bathroom?"
Rogers -"How is that relevant?"

Oh but it is now that you are a celebrity dirtbag.