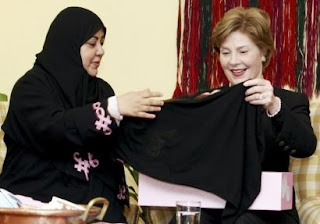 Why oh Why do we continue to eat our own? The over the top reaction to Laura Bush donning a gift of a head scarf has sent the BDS'ers on the right into a tizzy.

"On Wednesday, her second day in Saudi Arabia, Mrs. Bush met with breast cancer survivors in the western seaport of Jiddah. As a token of appreciation, they presented her with a long black scarf — the kind Saudi women use to cover their hair in public — with pink ribbons symbolizing the disease attached to both ends.


"No campaigns, ads or programs would have had the kind of impact that Laura Bush's trip has given to breast cancer awareness in the kingdom," said Samia al-Amoudi, a gynecologist who was diagnosed with the disease in 2006.

So Laura Bush briefly dons a scarf with breast cancer support designs on it while on a trip about breast cancer awareness and some members of the right throw themselves on the floor kicking and screaming? Puh-leaze!

Was no one paying attention to her attire during the rest of her trip? Here's a picture of the First Lady meeting with His Majesty King Abdullah Bin Abd al-Aziz Al Saud at the King's palace Oct. 23, 2007, in Jeddah, Saudi Arabia. 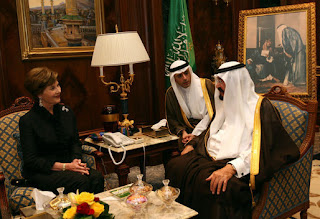 What a powerful image and one that was completely overlooked because she wore a gift for a few seconds...

The clothing was given to her as a gift and to refuse it would have been a major insult to her hosts. It had nothing to do with politics or sending a message - just simple damn courtesy. Is she supposed to offend just to make a point? She is an elegant and gracious First Lady and certainly did not deserve the treatment she received from the Right.

About 10 years ago I worked at a hospital in Oklahoma City. My unit was the liver transplant unit. We had many patients from Saudi Arabia and the Middle East come to the US for a workup (no they did not get placed higher on the list or take the spot of an American waiting on a liver transplant). There were many clashes between the cultures especially since the majority of the nurses were female. But we learned to go with the flow - all of us.

One family started every morning with tea and dates. If you were taking care of their loved one, you were offered a cup of tea and some dates upon entering the room in the morning. I hate dates and only like sweet iced tea BUT to refuse to sit for a moment and turn down the show of congeniality would have been an insult. It wasn't too much to ask and I never felt as if I was condoning their beliefs about women. It's called being polite. Sometimes that's all it is no matter how one tries to spin it.

Mike over at Mike's America has some more great pictures of the First Lady's trip.

Dee at Chatterbox Chronicles agrees with me about the over the top reaction.
Posted by Robin at 5:18 PM