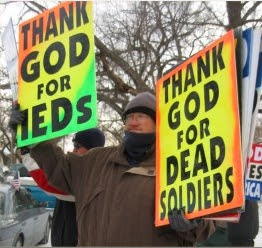 Breaking News - the family of LCpl Matthew Snyder has won their case against the disgusting Fred Phelps and his family of haters at the Westboro Baptist Church...

A federal jury on Wednesday awarded the father of a fallen Marine $2.9 million in compensatory damages after finding an anti-gay Kansas church and three of its leaders liable for invasion of privacy and intent to inflict emotional distress for picketing the Marine's funeral in 2006.

The jury was to begin deliberating the size of punitive damages after receiving further instructions, although U.S. District Judge Richard Bennett noted the size of the compensatory award "far exceeds the net worth of the defendants," according to financial statements filed with the court.

Albert Snyder of York, Pa., sued the Westboro Baptist Church for unspecified monetary damages after members staged a demonstration at the March 2006 funeral of his son, Lance Cpl. Matthew Snyder, who was killed in Iraq.

Snyder's suit named the church, its founder the Rev. Fred Phelps and his two daughters Shirley Phelps-Roper and Rebecca Phelps-Davis, 46. The jury began deliberating Tuesday after two days of testimony.

And if there was ANY doubt that this group was the anti-thesis to Christians...

Earlier, church members staged a demonstration outside the federal courthouse, which is located on a busy thoroughfare a few blocks west of Baltimore's Inner Harbor, while passing motorists honked and shouted insults.

Church founder Fred Phelps held a sign reading "God is your enemy," while his daughter Shirley Phelps-Roper stood on an American flag while carrying a sign that read "God hates fag enablers." Members of the group sang "God Hates America,"' to the tune of "God Bless America."

There is so much more I could say about this disgusting group of human excrement but I am just too much of a lady to say it.

I hope that other families that have been subjected to this form of mental torture at a time of pure agony follow the Snyder family's footsteps and sue the hell outta these creeps.

UPDATES:
Looks like the creep and fake preacher Phelps and his motley band of fools will have to cough up a bit more dough...

The jury awarded Mr Snyder $2.9 million for compensatory damages and a staggering $8 million in punitive damages

Meanwhile here is an interview from CNN that shows what a truly despicable and hate-filled nasty man Phelps is. I'll say it again - I hope every single family that has been subjected to the filth of these vile creatures takes up the mantle and files a lawsuit against these cretins. Hell is too good for them... (hat tip to Blue Crab Boulevard)