In Honor of LCpl Miguel Terrazas 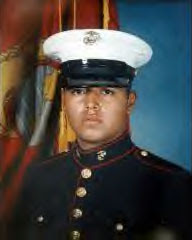 In all the coverage of the Haditha incident, the name of one Marine is mentioned briefly but consistently. This Marine, LCpl Miguel Terrazas, was killed by the IED blast early that November day in Haditha in 2005. While his death is frequently recounted in the media, very little has been written about his life. As part of my salute to the Haditha Marines, the obvious place to start was with LCpl Terrazas.

Lance Cpl. Miguel Terrazas graduated from Mountain View High School in 2003. He played left guard for the varsity football team. He also worked at the family business, an El Paso taco shop. Terrazas followed the family tradition and joined the Marines after graduation.

Rosario Terrazas, the Marine’s paternal aunt who spoke for the family Monday.
“He felt that that was what he needed to do in his life (join the Marines) to protect his family and his country,” Rosario Terrazas said. “He made us very proud of him. … I was pushing him toward college, but he said that wasn’t his route.”

Terrazas enlisted in the Marine Corps on Aug. 11, 2003. He completed basic training at Marine Corps Recruit Depot San Diego, Calif. After basic training, Terrazas attended the School of Infantry -West at Camp Pendleton. His love of hunting paid off during training....

That skill translated into excellent marksmanship during his 2004 training at Camp Pendleton in California. He was so proficient at daytime and zero-visibility exercises, he was designated point man for his squad when it left for Iraq in June 2004.

As part of Kilo Company of the 3/1 Marines from Camp Pendleton, LCpl Terrazas deployed twice to Iraq. During the first tour of duty, Terrazas received a commendation for bravery.

On Aug. 18, 2004, after an ambush that started with the detonation of an improvised explosive device, he quickly moved to high ground and accurately reported the battlefield situation, according to the commendation. As the designated marksman, he shot an escaping insurgent, disabling him and ending the threat to his fellow Marines.

The similarities to the early moments in Haditha in November 2005 are chilling.

LCpl Terrazas was driving a humvee as part of a convoy through Haditha on November 19, 2005. An IED ended this hero's life on the dusty street. 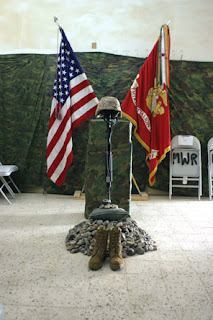 On November 29, 2005 a memorial service was held at the base in Haditha for LCpl Terrazas.

Friends, leaders and fellow Marines of Terrazas’ packed a small room at the base here to pay their respects and celebrate the life of the fallen warrior. The battalion’s chaplain, Navy Lt. Philip N. Park, welcomed everyone and started off the service with an invocation.

Terrazas’ commanding officer, Capt. Luke McConnell, gave the opening remarks by talking about his leadership skills and life in the military.

After remarks from friends, 1st Sgt. Albert Espinosa, the company first sergeant, took roll call. A number of names were called off, and a loud ‘here first sergeant!’ came after every name until Terrazas’ name was read.

And again there was no answer.

The silence after Terrazas’ name brought out many different emotions in each person in attendance, as did the sound of Taps, which is a military tradition for fallen service members. 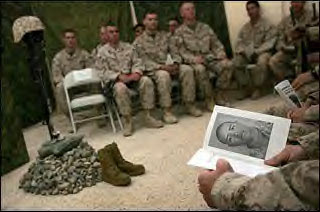 Here is how family, friends and Marines remember LCpl Terrazas...

Rosario Terrazas said her nephew always looked on the positive side of things and looked forward to family fishing trips. “He was going to do his four years (in the Marines) and he wanted to attend school to get into some kind of law- enforcement agency,” she said. “Then he wanted marriage and kids.”

Rosario Terrazas, who spoke on behalf of the family Tuesday, said her nephew was a man dedicated to his family, who proudly claimed his older brother as his best friend.

“He was a man of heart,” commented Terrazas’ platoon sergeant Staff Sgt. Travis M. Fields. “He always brought a smile everywhere he went. He is the kind of guy you can say will never be forgotten.”

"I served with Miguel during OIF II. All I can say is I loved "TJ" like a brother. I wear his name on my arm. He always had a way of bringing you up and pushing you forward during the toughest times. He was always the life of the party. I know I speak for everyone in 3rd plt when I say this there isn't any man that I'd rather stand beside me in any situation. He always made the best of even the worst situations..." Lcpl Donald E. Vanderlip II posted at LCpl Terrazas' memorial page at Fallen Warriors.

During the invasion of Fallujah, he continued to serve as squad point man, was involved in several firefights with insurgents and was a driver for one of the platoon's Humvees, "showing an uncanny ability to drive through debris and around obstacles/gunfire at high speeds without risking his fellow Marines on board," wrote his former commanding officer, Jesse Grapes, in a letter to Martin Terrazas Sr. after his son's death.

LCpl Miguel Terrazas may not physically be with his family, but there is no doubt that he remains in their hearts and minds...

In the cool early-morning hours before the sun rises high and harsh, or in the evening as it slips behind the Franklin Mountains, Martin Terrazas Sr. likes to sit and talk or read to his second-born son, Miguel.

Sometimes he reads a few pages from a book about Marines serving in Iraq. But, mostly, he reads Miguel's favorite, the local newspaper -- entire stories if Terrazas has time, headlines if he doesn't. "Listen to this," the father says.

Terrazas might bring water and a lawn chair, if he's going to stay awhile. His first-born son, Martin Jr., might ride his Harley-Davidson over because Miguel loved the bike and wanted one just like it. But even if there's no time for a long visit, there's always time for a "hi" and a "bye" and a hug.

Inside the National Cemetery at Fort Bliss here, Terrazas hugs the white granite tombstone that declares Marine Lance Cpl. Miguel Terrazas "a devoted son brother and grandson who loved his country." The father whispers, "Hang in there, mijo " -- using Spanish for "my son."

Thank you for giving the ultimate sacrifice for us, LCpl Terrazas. And to the Terrazas family - thank you for raising a hero. May God keep you in his loving embrace. We will be eternally grateful that men such as LCpl Miguel Terrazas lived.

And may we remember every day the sacrifices of our brave Military men and women.