Someone Please Give Sheila Jackson-Lee a Clue

Congress was at it again today - wasting taxpayers' money on an issue that is being resolved in the courtroom where it belongs. Conyers and his comrades held hearings on the Jena 6 case trying to buy some more face time and show how concerned they are for the children. What a crock of crap.

Take for example Sheila Jackson-Lee's hysterics at the hearing...

"Shame on you!" Rep. Sheila Jackson Lee (D-Texas) shouted at Washington, the first African American to hold the U.S. attorney’s post in western Louisiana. "Mr. Washington, tell me why you did not intervene? Six broken lives could have been prevented if you had taken action.”

Shame on you," Rep. Sheila Jackson Lee, D-Texas, said to Justice Department officials, directing most of her fury at Donald Washington, the U.S. attorney for Louisiana's western district — and the first black person to hold that position.
"As a parent, I'm on the verge of tears," Jackson Lee said.
"Why didn't you intervene?" she asked repeatedly, raising her voice and jabbing her finger in the air as some in the audience began to applaud.

This travesty should serve as a model for all that is wrong with Congress. The level of ignorance is astounding. It is obvious that no one bothered to read the FACTS about the case. Instead they chose to take the word of race-baiter Sharpton and a media that still can't get it right. All at our expense.

The shame should be directed at Sheila Jackson Lee who wailed about the six broken lives. Several of the 6 were far from angels and blaming the US Attorney is typical of the failure to hold people accountable for their own actions. Four prior convictions before the December 2006 incident shows that lives were already on the way to being broken. Notice that Jackson Lee didn't bemoan the fate of the true victim in this case, Justin Barker, who is still recovering from injuries received during the vicious beatdown courtesy of the Jena 6.

Here's a sampling of facts that Sheila Jackson Lee chose to ignore...

4/13/2006: Initial charge above plea bargained down to simple battery. Released on probation until the age of 18 and ordered to obey all laws.

And don't cry about the wasted lives of two other members of the Jena 6. The Hip Hop crowd has made them celebrities...

They are Carwin Jones and Bryant Purvis of the so-called "Jena 6." The two walked the red carpet of the 2007 BET Hip-Hop Awards, held this weekend in Atlanta. They strutted down the red carpet and presented the Hip Hop Video of the Year award.

Here's a pic of the two on the red carpet... 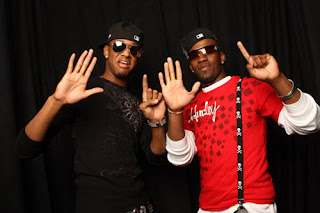 Here's a list of links to more facts that you would ever want to know about the Jena 6 (including pdf's of statements of witnesses, etc).

And take a moment to read Jason Whitlock's article, "Jena 6 case caught up in whirlwind of distortion, opportunism", for more debunking of many of the media reported events surrounding the Jena 6.

The info is there and easily accessible. But you have to want to know the facts. It's obvious that Conyers, Jackson-Lee and the other members of Congress at today's hearing have no interest in the facts. The facts get in the way of their finely honed skills of outrage.