Another Fire in the Senate Office Building

More reports out today about another fire in the Senate Office Building...

WASHINGTON (AP) - U.S. Capitol Police on Friday were investigating the latest in a series of suspicious fires occurring in Senate office buildings.
Police spokesman Sgt. Kimberly Schneider said a small fire was discovered about 8:00 a.m. EDT in a 2nd floor woman's restroom of the Dirksen Senate Office Building. She said it was quickly extinguished and there were no evacuations or injuries.
Schneider said it was at least the 7th confirmed fire in the office buildings since late September. The fires are all suspicious in nature and Capitol Police are exploring the possibility that they are linked, she said.

Who could be doing this? I have MY suspicions and they are colored "PINK"... 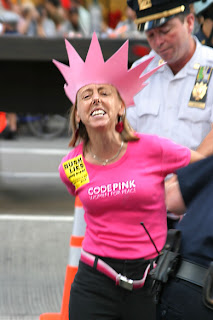