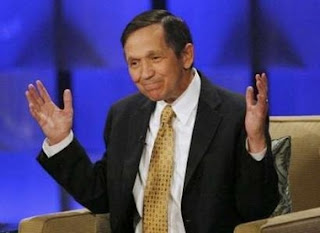 Dennis "Department of Peace" Kucinich is going to throw down the impeachment card next week and the nutroots are ecstatic! He's only going after Vice President Cheney in this round but that is enough red meat for the inmates in the asylum to get into full foaming at the mouth mode...

Over at the DUmp, they are heaping praise on the little man... Funny but using the word "backbone" and "balls" when describing Kucinich sends me into fits of hysterical laughter...

I think I like Kucinich even more than Edwards! Go Dennis! :patriot:

I think he is the only one who really knows whats going on and has the balls to bring it to light.

The more I see of him, the more I like him.

Kucinich has more courage and grit than the whole repug side of the aisle in BOTH houses.

This is who should be president.

Go Kucinich! Show them what a backbone is.

Yes, regardless of the end result, I think this courageous act *will* go down in history as a *very* nice try!

They are already making their plans to blast Congressional Offices with phone calls for an up or down vote...

Prepare to hit the phones next week, guys!

Suggest you make two calls at least - if you can. One to Dennis, and the other to your rep - whoever he or she is, regardless of party affiliation. Call more than that if you can. They NEED TO KNOW we are out there BY THE MILLIONS!!!

Let's have a straight up or down vote. Those assholes in COngress make the big bucks, let's force them to put something on paper. Let's see who stands where....

Good! History will have a chance to record the names of those who stand FOR the Constitution of the United States of America (Yay) and those who don't :puke:

Begin with a question: Are you in the game for yourself or your country? There is nothing noble in preserving one's own arse; in expediency; in fighting only the safe battles.

True nobility emerges when someone throws it all away for what is right.

Whoo-weee it's gettin' deep in here.... I do have to agree with the moonbats on this one thing- let's see who votes along with Kucinich so we can ridicule the hell outta them. It will make a great campaign ad for their opponents.

And what would a thread from the DUmp be without the obligatory tinfoil hat conspiracy theories?

So what will the MSM talk about next week to divert attention?

The Winger Wailers are trying to turn the UFO story into something. Just remind them that Reagan not only claimed two UFO sightings, his Star Wars plan included fending off Aliens.

You've got it backwards. That UFO stuff was brought up to try to discredit Dennis because he has been forcefully calling for the impeachment of cheney.

I'll have to remember that term "Winger Wailers" - it goes quite nicely with Bushbot and warmonger.

There is always at least one completely clueless nutroot on these threads and I wasn't disappointed this time...

I hope Lynne Cheney is in the deal also.

Say What? Impeach the wife of the Vice President? If that was possible, we'd have taken down Tipper just for being married to Big Al.

But by far, this statement tops them all. Warning - if you have any food or drink in your mouth, swallow before continuing. I am not responsible for damage to your monitor or keyboard when you spew out laughing...

and calling Dennis Kucinich a "lunatic" just shows you have no insight, no great amount of wisdom, and certainly no intelligence.

Well just add "no insight, wisdom or intelligence" to my profile cause Dennis "my precious" Kucinich is a lunatic. I can't wait to see what happens with this. Is it possible to have a Congressional rating less than zero? One can only hope...

Michelle Malkin is looking forward to this Impeach-a-palooza
Posted by Robin at 9:07 AM