I've lost count of how many times we've been through this and how many times Harry and Co have fought tooth and nail for failure in Iraq. There's not too much more than can be said about these treasonous arseholes...

Senate Majority Leader Harry Reid, D-Nev., said the only way to get troops the money was to approve the restrictions outlined by Democrats.

"Anything else is political posturing," said Reid.

Reid and House Speaker Nancy Pelosi, D-Calif., said this week that if Congress cannot pass legislation that ties war money to troop withdrawals, they would not send Bush a bill this year.

Instead, they would revisit the issue upon returning in January, pushing the Pentagon to the brink of an accounting nightmare and deepening Democrats' conflict with the White House on the war.

In the meantime, Democrats say, the Pentagon can eat into its $471 billion annual budget without being forced to take drastic steps.

"The days of a free lunch are over," said Sen. Chuck Schumer, D-N.Y.

Look at this picture from Michael Yon and repeat Chuck Schumer's statement over and over.... 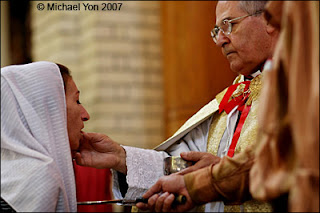