Following the Money in the Claims Against the Haditha Marines

Still playing connect the dots with the whole Murtha - Sec of Navy Winter - Northrop Grumman thing. Unfortunately my paying job took most of my attention today so research was hit and miss but there were several tidbits to further my theory...

In the same filing, Winter acquired 6433 shares in the Northrop Grumman Savings and Investment Plan, a qualified profit sharing plan.

The filing also listed a Stock Option - right to buy for 20,000 shares of common stock in 4 equal installments beginning 8/20/04.

Next is another SEC filing for May 2005 for Donald C. Winter that involves moving some Northrop Grumman stock into the Profit Sharing Plan

Now I am far from an investment analyst and really don't understand all the financial mumbo-jumbo but it looks like there is a link to Sec. Winter and the profitability of Northrop Grumman.

Here is a chart that shows the dollar amounts of federal contracts for Northrop Grumman since 2000. 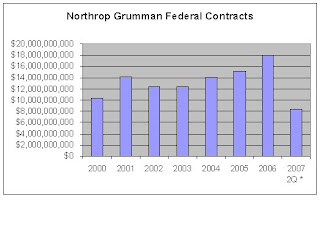 Notice the steady increase from 2003 to 2006. Interesting that 2006 - the year Haditha was blasted through the media was the highest year so far for $$ from contracts. 2007 contracts are through the 2nd quarter and include a portion of the 3rd quarter.

But the most damning piece of info was from this article about complaints filed with Sec Winter regarding the NCIS treatment of the Haditha Marines. Pay close attention to the highlighted portion...

On another front, Navy Secretary Donald Winter has rejected calls for a probe of Naval Criminal Investigative Service agents who interviewed witnesses and the men who were ultimately charged.

Chessani’s attorneys last month filed a complaint with Winter alleging the agents had used bullying tactics that included not allowing several Marines to use the bathroom or have anything to eat or drink during lengthy sessions.

The tactics, the attorneys complained to Winter, seemed to be part of an effort to find wrongdoing based on comments made last year by U.S. Rep. John Murtha, D-Penn., that the enlisted Marines responsible for the death had killed in cold blood.

“It is reasonable to conclude that the improper conduct of NCIS agents ... was fueled by a desire to substantiate Congressman Murtha’s irresponsible public statements,” the attorneys said in their request to Winter.

Winter responded late last week, saying that the Department of the Navy enforcement agency follows the law and that no investigation was necessary.

Winter is over NCIS - NCIS does a piss-poor job on the Haditha investigation and despite everything pointing to innocence, comes up with charges that on the surface give credence to Murtha’s statements - Winter is a former big wig at Northrop Grumman - Northrop Grumman benefitted from Murtha’s position on the defense appropriation committee.

This is just too much of a “coincidence”, IMHO.

Previous Related Post:
Connecting the Dots Between Murtha and the Haditha Prosecutions
Posted by Robin at 2:04 PM