Now Work is Interfering With Blogging

Damn that job - the new company has taken over at my job and of course they have a new computer system. The first thing announced at computer training - No Surfing the Net and Absolutely No Blogging while on company time. Now that just sucks. I can't help it if I can multi-task. So that means I am going to have to lay low on blogging during the day which was my prime time for blogging. But fear not - once I have mastered my Palm Treo, I'll be a mobile blogger. There's more than one way to skin a cat.

Meanwhile pop over to Conservatism With Heart and give Dee some high fives. Not only did Sean Hannity drop her an email about one of her posts but she was able to promote her blog and radio talk show during a call on his radio show today. 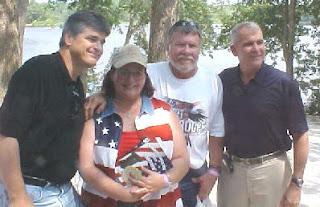 Dee may have talked to Sean twice on his show but I'm still one up on her - I got to meet him personally and he's read a couple of my articles on his show. You know I love ya Dee!

The IVAW bus caught fire over the weekend and of course they're claiming arson. Someone over at Portland Indymedia claimed it was "firebombed" and then had to retract their claim. I'm sure the age of the bus had absolutely nothing to do with it...
Posted by Robin at 9:14 PM