Pundits Wrong About McCain's Surge UPDATE - And They Were Wrong About the JFK/MLK Clone too!

Scroll for Updates
Watching coverage of the New Hampshire primaries makes me realize that "professional" pundits are no better at predicting election results than my dog. It also makes me realize just how far away from the grassroots the pundits are.

Take the win by McCain. Pundits are crowing that this is McCain's surge to the nomination and this win makes him a frontrunner. Puh-leaze - this is simply a fluke that carried over from 2000 and was assisted by McCain's temporary residency in New Hampshire. Do you seriously think that Republican voters can forget the Gang of 14, McCain-Feingold, Coddling terrorists, the Amnesty debacle, etc? McCain has been strong on the war in Iraq and Afghanistan but as far as the rest of the issues he scores a big fat ZERO in my book. I simply can't believe this win will carry McCain to the nomination.

Strangely enough I find myself wishing for a Hillary Clinton victory in New Hampshire. I think the Obama blitz has been overdone and the media kissing his feet is frankly making my stomach hurt. It's like Elvis and the Beatles all over again - crying young women at the rallies, women fainting during speeches, etc. I'm waiting for the panties to be thrown on the stage. And all this comparison to JFK and MLK is disgusting. This guy is a speck in time compared to JFK and MLK. Can anyone tell me what Obama has done that even rises to half the level of these two men? Besides it would be nice to see the pundits take another one on the chin with a Clinton win.

So much for this whole thing being over quickly... Looks like its gonna get crazier as time goes on. I'm going to have my dog pick the winners of the next primary and see how she fares compared to the pundits and the polls. I bet she's more on the money than the "experts"... 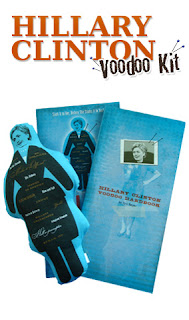 Whew... looks like the $$ I spent on gifts of Hillary Clinton Voodoo Dolls will not be wasted...

FOX News just called it for Hillary and Obama is sweating visibly during his "concession" speech... Now excuse me while I go stick my head in some cold water cause this "happiness" over Hillary winning has my head on the verge of an explosion.
Posted by Robin at 9:52 PM