The Latest on the Sugar Refinery Explosion 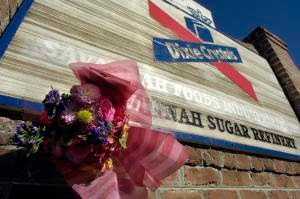 Needless to say everyone here is still in shock after the explosion at the Sugar Refinery. The fires are still burning in the sugar silos and the hunt for missing employees continues.

After four days, two of the sugar storage silos are still burning. Emergency crews cleared the scene and brought out a helicopter to drop 250-gallon buckets of water on the silos. They dropped nearly a hundred buckets today, but the fire is not yet out.

The plant has suffered eight structural collapses so far, and crews have searched 95 percent of the complex. They're now waiting for the silo fires to be extinguished before continuing to search for the two people believed to remain unaccounted for.Thermal imaging showed the fires in the silos burning in excess of 4,000 degrees, prompting fears of more collapses. Sugar stored in the silos is burning far as 12 feet down in places.

The latest reports have 6 bodies recovered from the wreckage with 2 still missing. Unconfirmed reports from plant workers and family members say that as many as 17 are unaccounted for. No names have been released to the public and the dead have not yet been identified.

Three people were released from the Burn Center in Augusta but 17 remain hospitalized. 16 are in critical condition and 1 is in serious condition. The injuries are beyond comprehension...

Twenty employees were admitted with severe burns from Thursday night's explosion. Seventeen of them are in medically-induced comas. "Some of them have very deep burns to the face and extremities," said Dr. Mullins. "There will be some scarring. We'll try to minimize that. Some of them will need reconstruction later on down the road.

Among those hospitalized in Augusta are two brothers and their cousin - all 3 are critical. Some injured are still hospitalized at Memorial University Medical Center in Savannah. One family member told me that her severely burned relative was identified by his shoes. Another was identified by the contents of his pocket.

Not only are the employees dealing with the tragedy of the loss and injury of friends and family but the plant is shut down. Granted Imperial Sugar is continuing to pay all the workers and their insurance but no one knows how long it will last. Reports are coming out that the plant will be re-built but many in the community have their doubts. The Sugar Refinery (better known as Dixie Crystals around this area) was built in 1917. It employed approximately 400 people. Over 100 were on duty the night of the explosion.

There are so many stories - people that were scheduled to work but were out sick with the flu that has been going around, people that had just clocked out, the truck driver that was pulling away with a full load of sugar, etc. Stories of people sitting in the break room when the walls started sucking in, refrigerators toppling and then the walls disappeared. Or the young man taking a bathroom break on his way out of the plant for the night that was blown through the walls and into an alleyway. In our case, my stepson had recently changed to straight day-shift or he would have been working Thursday night at the site of the explosion. There but for the grace of God go I.

Please keep all those affected by this tragedy in your prayers especially the family and friends of those we lost and those fighting for their lives in Augusta. The effects on the people and the community will be longterm.