Pearls of Wisdom (?) from Mama Obama 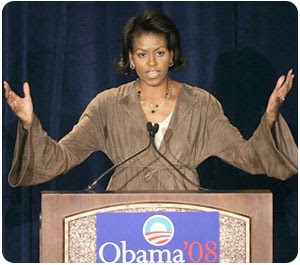 Four years ago we had Momma T leading John Kerry around by the nose. Now we have Michelle Obama who spouts off phrases that make me feel like I'm reading another book in the Left Behind Series or the Dummies Guide to Marxism. Here's a few from just the past few days...

Sounds like a line right out of the Marxist playbook...

**************************
That we have to compromise and sacrifice for one another in order to get things done - that is why I am here, because Barack Obama is the only person in this race who understands that.
That before we can work on the problems, we have to fix our souls - our souls are broken in this nation.

There is only one "person" that I trust to fix my soul and it certainly isn't BHO.

*****************************
Don't get sick in this country - not here. Americans are in debt not because they live frivolously but because someone got sick. And even with insurance, the deductibles and premiums are so high that people are still putting medication [and ?] treatments on credit cards.

As opposed to the people putting political donations on credit cards? Or buying craploads of electronic gear for their home? How about buying a house that you can't afford? Why is that MY problem. I work to pay my bills including my health care premiums and deductibles. Why should anyone else get a free pass?

“For the first time in my adult lifetime, I am really proud of my country,” she told a Milwaukee crowd today, “and not just because Barack has done well, but because I think people are hungry for change.”

No further comment needed on this except for GET. A. CLUE.

Barack Obama will require you to work. He is going to demand that you shed your cynicism. That you put down your divisions. That you come out of your isolation, that you move out of your comfort zones. That you push yourselves to be better. And that you engage. Barack will never allow you to go back to your lives as usual, uninvolved, uninformed.

OK - this one is just pure creepy. How can a President demand that I shed my cynicism? Is that part of the "saving your soul" package? I do agree with the "require you to work" but I don't think she meant it in the way I am thinking.

If you want to see how an Obama supporter has become "involved" and "informed", pop over to Michelle Malkin's place and read the letter from an Obama supporter. I'll take uninvolved and uninformed over vulgar sheeple garbage spewer any day of the week.

For those of you that have read the Left Behind series - does the picture above remind you of the character Leon Fortunato? Here's how Leon is described over at Wikipedia...

He was fond of dressing in ornate and flowing robes and strutting all over his college campus. After being expelled, Fortunato grew fond of becoming a kingmaker, preferring to work behind the scenes to elevate his chosen candidates to any positions of power they wanted.