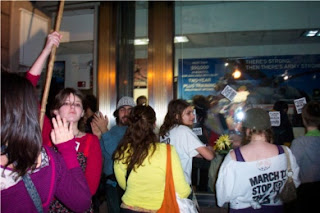 The spawn of the Leftists decided that trashing a DC Recruiter's Office would be something "cool" and help them speak truthiness to power. Yet like the punk-asses they are, they post articles bragging about their actions along with pictures. Ya gotta love their bitching name - "Funk the War" - how original and how totally anarachistic... Here's the piece from Indymedia (my comments are in red)

After many previous protests had found the 14th st recruiter "closed" at 5PM, Funk the War found them open, and the door unlocked at nearer to 6Pm and promptly exploited the situation by demonstrating to them first hand how an occupying force behaves. (more like how a bunch of spoiled snot-nosed brats who didn't get enough love from Mommy act)

After a loud commotion inside while outnumbered cops watched, recruiters finally managed to get protesters to leave-but not before literature and full-body length cardboard displays in the street window area were destroyed. In addition, hundreds more "Funk the War" stickers were plastered all over just about everything that would take them. By the time everyone was out it looked like a tornado had swept through the lobby. (oooww - how incredible badass you are - tearing up literature and cardboard displays. And the cops that watched should be fired)

One recruiter tried to grab an activist but found himself overpowered by SDS's superior strength and numbers and had no choice but to give up! (SDS - the rehash of the hippie stink from the 60's & 70's... superior strength? more like superior stench)

This came on the heels of the whole group marching in K st and Connecticut Ave at the height of rush hour, closing War Profiteer's Row to cars fro quite a while. The group closed out by going after DC GOP headquarters, but that door was locked and there were too many cops around to break it down. (aw poor liddle babies couldn't break down the door of the bastion of imperialism due to the "man")

What? No "V for Vendetta" masks? I look forward to seeing further reports on this in the media... (insert sounds of crickets chirping). Hey Michelle Obama - does THIS make you proud?
Posted by Robin at 1:19 PM