Anti-War Protest During Easter Mass - Can Someone Stop These Lunatics? 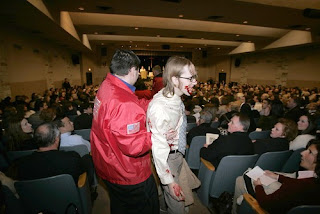 Is there nothing sacred anymore? Can't people celebrate the Easter Mass without dipshits like this group of neuron-impaired idiots?

Three men and three women startled the crowd during Cardinal Francis George's homily, yelling "Even the Pope calls for peace" as they were removed from the Mass by security guards and ushers.

The group, which calls itself Catholic Schoolgirls Against the War, said in a statement after the arrests that they targeted the Holy Name Cathedral on Easter to reach a large audience, including Chicago's most prominent Catholic citizens and the press, which usually covers the services.

Kevin Clark of International Solidarity Movement told the Chicago Tribune that he attended the Mass to serve as a witness for the protesters. "If Cardinal George is a man of peace and is walking the walk and talking the talk, he should have confronted George Bush and demanded an immediate end to the war," Clark said.

Ah-hem - Mr. Clark - what exactly does that have to do with terrorizing the church members and their families while they celebrate the resurrection of Our Lord Jesus Christ?

The Chicago Trib has identified the slugs (I mean "thugs")...

We're not talking about a street demonstration or march - we're talking invading an Easter Mass filled with FAMILIES and children. The attendees were not there to "witness" for these lunatics and their message. In light of the increased security due to the spate of church shootings, these fools should be thanking their lucky stars that someone didn't shoot their sorry asses.

And about that little mention of the International Solidarity Movement member "witnessing" the protest for the group - ISM has a long history of antics and violence in the name of peace. Not to mention their ties to some of the "prominent" anti-American groups masquerading as anti-war organizations... From the website Stop the ISM...

The International Solidarity Movement(also known as the Palestine Solidarity Movement in the United States) is a decentralized network of activist organizations, some of which are 501 (c) (3) tax exempt, set up to aid the PLO in its goals to destroy Israel while also financially aiding American anarchist and communist groups to expand their power base for “world revolution.” It is similar to a multi-headed Hydra in which the heads are the individual organizations and the ISM/PSM is the body that connects them. It’s mission is to provide the “soft-side” (seemingly nonviolent) support to Palestinian terrorism and aggression against Israel by sending activists to interfere with Israeli security operations and also by spreading propaganda abroad. It uses many the US college campus network to achieve these goals. Working under pseudonyms such as Al Awda, Palsolidarity, SUSTAIN, Wheels of Justice Tour, Middle East Children’s Alliance and other names it serves to interfere with Israel’s attempts to fight terrorism in the Middle East.

Any of the pseudonyms sound familiar? Well if you ever were subjected to an Anti-War, Free Mumia Convergence of Morons, then they should - Middle East Children's Alliance, Al Awda, and Palestinian Solidarity Movement are well represented among the ANSWER and United for Peace & Justice Crowd.

Photo of the proof of liberalism rotting your brain courtesy of the Chicago Tribune.
Posted by Robin at 10:16 PM