Support The Band of Mothers 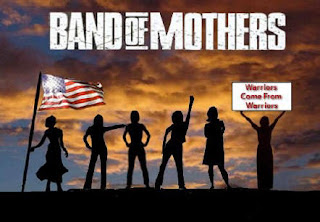 There is a group of women that have formed an organization in support of the US Military and the troops that protect us. This group is called The Band of Mothers. It was started by Beverly Perlson, the mother of a member of the US Military.

Here are some snips from The Band of Mothers Mission Statement...

The Band of Mothers are devoted to the Band of Brothers and dedicated in our mission to garner support and respect for these Noble Heroes. In all wars, past and present, our Veterans and Soldiers have served selflessly and honorably to defend our freedom and our way of life. We believe our Soldiers and Veterans are America’s Noble Warriors and Heroes and it is our duty to protect and defend them. As it is the nature of the lioness to protect and defend her cubs, so is the way of The Band of Mothers...

As our Soldiers fight to preserve our way of life in a far off land, some “politicians” have undermined their mission and their efforts. This behavior is intolerable and unacceptable to The Band of Mothers. In the interests and welfare of our Noble Heroes, it is necessary and essential that these “politicians” allow our Generals and those trained in warfare to conduct this war. We propose that the careless ranting by these reckless politicians is aiding and abetting the enemy and undermining the morale of our troops...


In the words of FDR, our Soldiers are “the pride of our nation” and The Band of Mothers is so very proud of them. We stand with them and we stand behind them.

Some have criticized BOM's work with the Gathering of Eagles. I don't understand why that would even be an issue. There is no rule about organizations teaming up for protests and activist actions. Check out the Calls to Action at any of the "anti-war" organizations - UFPJ, IVAW, ANSWER, CPUSA, etc all work together.

Some have complained that BOM and GOE have interrupted meetings, parties and speaking engagements. Others have claimed that BOM use crude conduct and intimidation. 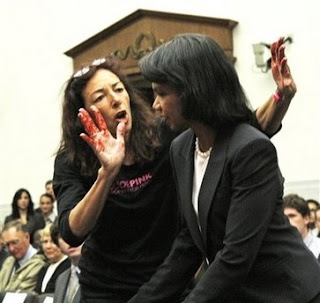 The BOM have been chided as acting like monkeys and lacking any human decency. 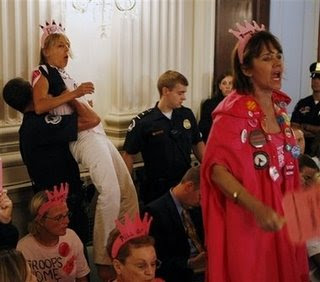 The anti-war crowd thinks the behavior of BOM does more harm than good though - as far as the public perception of the organization. 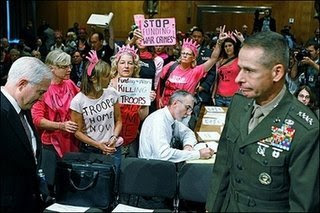 Complaints have been voiced about not having any "rules" for joining and that the name implies "mothers of military members" or females only... 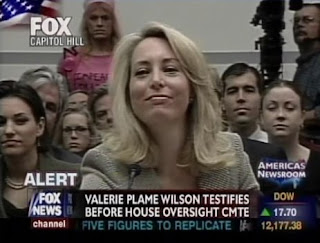 A few have actually called for the BOM to go to another country, like Venezuela if they don't like the free expression of speech here. 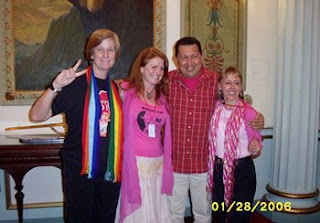 Yeah ... I can see why people think such bad things about The Band of Mothers [SNORT]

Seriously - pop over to Band of Mothers and buy a TShirt in support of the organization!
Posted by Robin at 10:14 AM