Winter Soldier II - "We Came. We Saw. We Murdered." 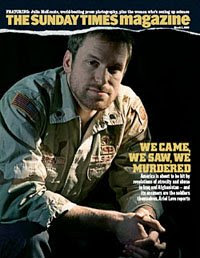 The TimesOnline has published a slick piece of propaganda for IVAW's Winter Soldier II - complete with a cover claiming "We Came. We Saw. We Murdered." Despite the lurid cover claim, the article states...

"The veterans are not against the military and seek not to indict it - instead they seek to shine a light on the bigger picture: that the Abu Ghraib prison regime and the Haditha massacre of innocent Iraqis are not isolated incidents perpetrated by "bad seeds" as the military suggest, but evidence of an endemic problem. They will say they were tasked to do terrible things and point the finger up the chain of command, which ignores, diminishes or covers up routine abuse and atrocities."

And as far as this attempt to use Haditha as a point of focus, the IVAW members should educate themselves about the Haditha investigations and Article 32 hearings before they go spouting off like Jason Washburn did in the article...

"It was a squad in his unit that went on the rampage after their vehicle was hit by an improvised explosive device.... 'The people on the ground are looking at serious prison time. Like life."

There was no Rampage - there was no Massacre. There are 3 Marines that will have their day in court beginning next month for the court-martial hearings. NOT ONE is charged with murder. The hearings provided mounds of evidence that completely debunks the rampage imagery, no matter how many would like it to be otherwise. I actually hope that IVAW attempts to use Haditha as part of their WSII - the facts will show them to be fabricators extraordinare.

It was nice to see that IVAW plans on turning in anyone that fabricates their experience or pretends to be a veteran for prosecution under the Stolen Valor Act. Especially when in the article itself, members of IVAW claim to have photographic evidence of war crimes and atrocities that has not been turned over to the authorities or for that matter, the media. Failure to report war crimes and atrocities is a violation of the law. Thank goodness they will have the Communists from the National Lawyers Guild to watch their back.

The article also mentions the "chartered bus-loads of protesters" that will be there to "confront and harass the 'traitors'". Nice attempt to go ahead and label those against the WSII as harassers and confronters to deflect attention from the fact that many have legitimate complaints about the event. Notice there was no mention of the asshat from IVAW that has threatened every single person that even makes mention of attending WSII - including women.

All in all it looks like it will be the same old thing - claims of "I was told", "I didn't actually witness but heard about it", ad nauseum.

Take Perry O'Brien's story about "someone" that encouraged others in the clinic to touch the heart of the dead Afghan civilian. Inappropriate? Yes. War Crime? No. O'Brien states in the article that he has pictures of this but did not participate in the heart touching. Since this was in 2003, one has to wonder why O'Brien made no mention of this incident in his multitude of interviews in 2005 during the launch of his website Peace-Out. Or why none of the pictures were sent to authorities.

I certainly hope that those testifying at WSII have access to LexisNexus so they can read over their previous interviews and statements to ensure consistency. Unlike the previous version of Winter Soldier, the world of information and history is at our fingertips and those testifying will not get the free pass that their mentors did.
Posted by Robin at 3:28 PM