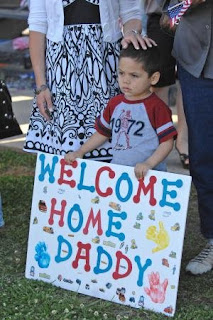 WELCOME HOME TO OUR SOLDIERS!
It's been a long 15 months for the families and the soldiers but what a job they have done! Members of the 2nd Battalion, 7th Infantry, 1st Brigade Combat Team, 3rd Infantry Division arrived home today.

Here's a recap of what this group of heroes accomplished in Iraq:

They turned Iraq's volatile al Anbar Province into a peaceful example for the rest of the country. And they were the first 3rd ID troops to celebrate their return.

Lots of hugs, kisses and tears today at Fort Stewart. And a grateful country says Thank You!

Photo by John Carrington of the Savannah Morning News
Posted by Robin at 10:31 PM