Some Background on Oil Change International 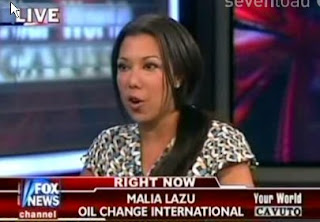 I have this nasty habit of researching the backgrounds of people who appear in the media making ridiculous claims or promoting a socialist agenda. That was the case today after catching the interview of Malia Lazu on Neil Cavuto's show this afternoon. (for more info on the interview see previous post here). Lazu was presented as a representative of the group, Oil Change International.

Malia Lazu is the project director for Democracy Action Project, a national youth electoral reform organization, focusing on rebuilding trust in government and ensuring that every vote counts. Democracy Action Project has a signature annual event called “Democracy Summer”. Ms. Lazu is the founding Executive Director for Mass VOTE, a statewide non-partisan coalition of community-based organizations, faith-based institutions and neighborhood associations working to increase voter participation in urban neighborhoods. Starting in Boston with Boston VOTE in 1999, Ms. Lazu created a model for connecting voting with issues people care about and the communities they live in.

She is a co-author of the book, How to Get Stupid White Men Out of Office - The Anti-Politics, Unboring Guide to Power

Last year, the city of Boston and the state of Massachusetts recognized her work in dramatically increasing turnout in Boston's communities of color. Now she's an organizer for the Cities for Peace program at the Institute for Policy Studies, and has worked with Harry Belafonte on voter organizing in impoverished neighborhoods in cities like Cincinnati.

And shocker... she was a member of a delegation that went to Venezuela to meet with Hugo Chavez.

Caracas, Venezuela, January 7, 2006—The singer, actor, and civil rights activist Harry Belafonte visited Venezuela this week, leading a delegation of 13 other prominent activists from the U.S. During their visit, the delegation toured the complex of cooperatives, known as the Endogenous Development Nucleus Fabricio Ojeda, visited with ministers, Venezuelan community leaders, opposition leaders, and Venezuela's President Chavez.

Another delegation member, Malia Lazu of the group Hip Hop Coalition, which organizes youth in the U.S., said that she could tell that the government has turned over power to Venezuelan poor. “Here in this country, for the few days I have been here, I have been able to see what happens when you give power to the people,” said Lazu. For her, the struggle of Venezuelans for greater social justice, “has breathed life into our [struggle].”

(note - Cornel West, another Obama campaign advisor, was also one of the delegates on the Venezuela excursion)

Well that explains her desire to see the US transformation into a Venezuela II. Remember the key phrase "social justice" is simply code for "socialism".

Here's what ActivistCash has to say about The Ruckus Society...

If you’ve heard of Ruckus Society at all, it was probably in relation to the 1999 World Trade Organization protests in Seattle. Americans watched in horror as organized hoodlums ran roughshod over the city’s commercial district, smashing windows, setting fires, overturning vehicles, ransacking a Starbucks coffee shop and a McDonald’s restaurant, and generally putting lives at risk. It’s no coincidence that the Ruckus Society staffers were in the middle of the melee, giving on-the-record quotes to national media figures. Nor was it an accident that Ruckus director John Sellers represented the protesters when the terms of their arrest were being negotiated with Seattle police. The Ruckus Society is generally credited with organizing the whole Seattle spectacle in the first place. When the dust had settled, Sellers smugly told USA Today, “We kicked the WTO’s butt all over the Northwest.”

Here's a couple of quotes from John Sellers...

“I make a distinction between violence and destruction of property. Violence to me is against living things. But inanimate objects? I think you can be destructive, you can use vandalism strategically. It may be violence under the law, but I just don’t think it’s violence.”
— John Sellers, in The Mother Jones, September/October 2000

Nadine Bloch, another Ruckus camp trainer, has been linked to the “black bloc” faction that attempted to disrupt the 2001 presidential inaugural in Washington, DC. FBI countertelligence deputy Terry Turchie has told Congress that “Anarchists working within movements such as the ‘black bloc’ committed much of the property damage accompanying these protests.”

Other organizations with ties to Oil Change International include Greenpeace, Rainforest Action Network, Institute for Policy Studies (IPS) and MoveOn.

And what would a group that claims the Iraq War is strictly about oil be without a tie to Iraq Veterans Against the War (IVAW)? Antonia Juhasz is an affiliate of Oil Change International. You might remember her from the testimony at Winter Soldier II on Corporate Pillaging in Iraq...

Antonia Juhasz is the author of several books about the oil industry and a visiting scholar with the Institute for Policy Studies. She notes that even Alan Greenspan, in his memoirs, wrote that “the war in Iraq is about oil,” although he later retreated from that statement under attack from the right. Juhasz says giving control of Iraqi oil to Western companies was a central part of the Bush Administration war plan. “This oil is sitting there like a gleaming prize at the end of the finish line,” she says. Juhasz also says US military planners wanted to employ 500,000 Iraqi soldiers for reconstruction, but the Bush Administration wanted to use private contractors. The soldiers were fired—“half a million men with guns made unemployed without jobs, without money, and their families left without hope,” she says, creating an enormous, hostile group that, including the families, may amount to 10 percent of Iraqis.

So, in essence, Oil Change International is simply another one of those "America is Bad" organizations that shares members with similar organizations. Have you noticed that the members of these orgs are also members of other orgs with the same purpose just different names?

One other thing to remember - these are the people speaking out in support of Obama for President. Keep their backgrounds and memberships in mind the next time you hear Obama claim to not be influeneced by "special interest"...
Posted by Robin at 9:33 PM