The Obama's World Tour Has Started 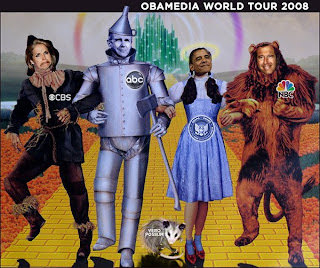 Yippee!! We get to see non-stop media lapdop coverage of The Obama's international tour extravaganza for the next week. The craptacular spectacle started today when Obama's feet touched Afghan soil. Here is a first hand report from a FReeper stationed at Jalalabad....

B. Hussein Obama has come and gone on his visit to Jalalabad Air Field in eastern Afghanistan. He landed about 1515 local and was gone by 1800, which is more than enough time for any Democrat to check the Natioanl Defense box, and he is now just as qualified as John McCain to speak on all matters related to Operation Enduring Freedom.

Well, that's the big news from the front line fellow FReepers. Keep up the fight at home and we'll do our part here.
God Bless, Captain (Now Major) Shamrock

Meanwhile Obama staffers are crying that John McCain let the world tour itinerary out of the bag...

But Friday, the Democratic presidential hopeful's Republican rival, John McCain, may have let the secret out of the bag - infuriating some Obama supporters and putting Camp McCain on the defensive.
"I believe that either today or tomorrow - and I'm not privy to his schedule - Sen. Obama will be landing in Iraq with some other senators" who make up a congressional delegation, McCain told a campaign fund-raising luncheon. "I am sure that Sen. Obama is going to arrive in Baghdad in a much, much safer and secure environment than the one that he would've encountered before we started the surge," McCain added.

Note to the crybabies - it's a Congressional delegation... It's not like it was a state secret or something. According to a writer at The New Republic, any idiot with a modicum of comprehension skills could have figured it out...

The timing of the trip had previously been shrouded in secrecy for obvious security reasons. But, in retrospect, I probably should have put it together (as I'm sure many of my more observant colleagues did). A little over a week ago, a Netroots Nation spokesperson told me the campaign had told her Obama was going to be out of the country during the conference, which was scheduled to run from Thursday through Sunday. Then, this week, the press was reporting that Obama would be in Jordan and Israel beginning Monday before heading to Europe later in the week. And we already knew Obama was headed to Afghanistan and Iraq at some point. That left a two-plus-day window in which he'd be out of the country before he was due in Jordan. Which basically had Afghanistan and Iraq written all over it if you were paying attention.

So those in charge of organizing YearlyKos knew that The Obama was going to be out of the country this week AND it came from the Obama campaign... so much for maintaining secrecy. Oh yeah - you don't hear them crying about Andrea Mitchell's slip of the lip...

They pointed to a Baghdad dispatch Friday afternoon from MSNBC's Andrea Mitchell, who indicated Obama would be arriving in Iraq "shortly," although she explicitly did not mention any specific days.

And about the trip not being a giant photo-op or a rock-star type campaign event across the sea...

Mr. Obama’s trip is drawing considerable attention in the United States and abroad. It is being choreographed by his strategists to coincide with a new television advertisement intended to highlight his ideas on foreign policy and portray him as ready to serve as commander in chief, an issue on which, polls suggest, he is lagging behind Mr. McCain.

Whoopsie!
And THAT, my friends, is straight from the New York Times.

I wait with baited breath to see what incredible enlightenment comes out of this extravaganza. But most of all, I can't wait to hear what kind of bone-headed statement flies outta The Obama's mouth - maybe something on the order of "the bomb that was dropped on Pearl Harbor"?

Photo above stolen from FreeRepublic...)
Posted by Robin at 6:36 PM