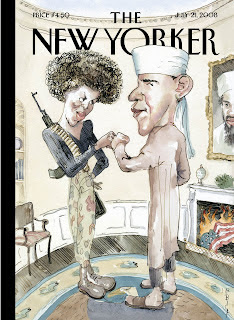 Good Grief... here we go again with what can't be discussed or satirized about The Obama. I think the magazine cover is a scream because it depicts BHO as exactly what he tries to suppress.

Here's what his handlers said about the cover...

The Obama campaign quickly condemned the rendering. Spokesman Bill Burton said in a statement: "The New Yorker may think, as one of their staff explained to us, that their cover is a satirical lampoon of the caricature Senator Obama's right-wing critics have tried to create. But most readers will see it as tasteless and offensive. And we agree."

Tasteless and offensive? Buddy you don't know the meaning of the word. Try putting up with 8 years of the President being called a "chimp", "coke-head", "mass murderer" etc. Try seeing magazine covers depict the President as a dunce or movies lauding his assassination. Or how about the Congressional leaders calling the President a liar and idiot.

The only thing I find tasteless and offensive is the fact that this Poseur has a chance to be the President of the United States and wield power over my country while denying his own heritage, whitewashing his comrades and playing the race card. THAT my friend, is offensive.
Posted by Robin at 7:44 PM