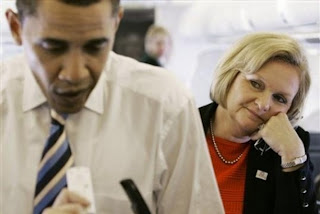 If this is what THE ONE meant by getting personal I am going to start getting my reservations to attend the McCain-Palin inauguration.

McCaskill said she stood by her remarks that she's "uncomfortable with anyone, regardless of gender, that is going to be vice president to one of the oldest presidents we've ever had that has never met a world leader."

When Stephanopoulos asked her it was fair to raise McCain's age, McCaskill doubled-down and mentioned his past skin cancer, saying, "I think what we're talking about is a reality. Other people talk about his melanoma. We're talking about a reality here that we have to face. This is someone who's going to be one heartbeat away from the presidency. All of us know it. I just think that it's the facts, George, and that's something that we need to start focusing on, are the facts, instead of distortions and lies."

Gee Claire... I would think you would be more concerned about someone that has their ass in the big chair who has no executive experience and minimal time actually working in the Senate. Oh and Claire - you wouldn't know a fact if it hit you in your brown nose. This from a woman that only won her seat in the Senate by using the fake stem-cell, Michael J Fox issue. I think that Claire is so besotted with THE ONE that she can't even think straight.

Here's wishing McCaskill a big old dose of Post-Election Stress Disorder come November. (Why does the Whitesnake song "Is This Love?" run through my head when I see the pic above?)
Posted by Robin at 12:30 PM