Take a Long Hard Look at This, Deepak Chopra 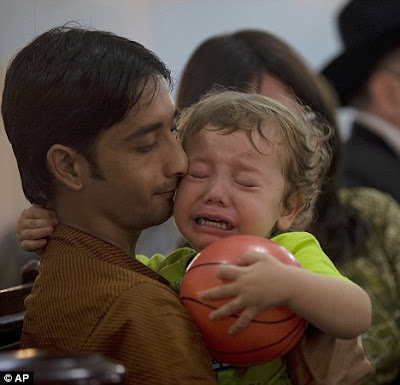 This is Moshe - he's 2 years old. He lived in Mumbai with his mom and dad until a few days ago. This picture was taken at the funeral for his parents who were killed by the cowardly disgusting pigs in Mumbai's terrorist attacks. This child will never see his parents again - will never really remember them since he's only 2. Thank God he will probably not remember sitting in pools of their blood until his Nanny could escape with him.

So Mr. New Age touchy-feely can't we just get along Deepak Chopra - take a long hard look at this picture of this baby crying for his murdered parents. May this image be burned into your brain the next time you want to excuse the behavior of murdering terrorists because they were "misunderstood" and no one liked them.

In his CNN interview, he was no less clear. What happened in Mumbai, he told the interviewer, was a product of the U.S. war on terrorism, that "our policies, our foreign policies" had alienated the Muslim population, that we had "gone after the wrong people" and inflamed moderates. And "that inflammation then gets organized and appears as this disaster in Bombay."

I'm not in favor of burning books but I'd make an exception in your case.

Moshe is in Israel with his grandparents and his nanny was given a visa to go with him. May God watch over this precious angel and ease his suffering.
Posted by Robin at 10:03 PM