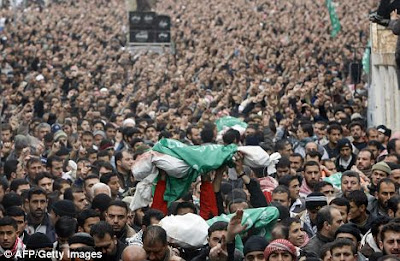 Right on cue, the media in Gaza has started the flow of pics of injured children and shroud wrapped bodies of children brought on by the "unprovoked" attacks by Israel. Anytime Hamas or Hezbollah starts getting their asses kicked, they bring out the pics of the kids and lament the terror being visited upon them.

The most recent ones are the photos of the dead bodies of the children of Hamas leader, Nizar Rayan. Not content to just carry the Hamas flag drapped bodies through the streets, the crowds uncovered the faces for the sympathetic media to see the horror brought upon the innocents.

In grisly scenes, mourners held up the bloodied bodies of the children to the cameras in a clear attempt to blacken Israel's name and highlight its brutality.

But let's take a gander at a few facts instead of just tearing out our hair and rending our clothes...

Nizar Rayan, his four wives and 10 of his children were all killed by in an Israeli air strike on his home after he ignored warnings they should go into hiding.

This "father" had ample warnings to protect his family but chose to have them die with him as "martyrs" for the cause of Hamas. And those secondary explosions were really nothing more than left-over New Year's Eve fireworks....

Rayan was such a concerned father that he previously used his own children for suicide bombings...

He even sent one of his sons on an October 2001 suicide mission that killed two Israeli settlers in Gaza.

The only thing really unusual about this is that Nizar Rayan actually stayed around and got killed. Usually the Hamas leaders and fighters run like cowards and leave the women and children to take the hits so it makes for better PR...

Hamas leaders have largely disappeared since Israel launched its operations but Rayan was known for openly defying the country.

Rayan was not just some figurehead either. He was quite vocal about his hatred of anything Israeli and encouraged violence against Israel...

Rayan was fundamentally against the state of Israel and had declared: 'There is nothing called Israel, neither in reality nor in the imagination.'
He was preaching in a local mosque on the day before he was killed and said: 'Our only language with the Jew is through the gun.'

Hamas law-maker Mushir Masri called Rayan's death an assasination and vowed that it would not go unpunished.

So what's new? The Palestinian resistance has been murdering innocent Israelis and even their own people for years. It looks like Israel will be the one delivering the painful response for a change.

In the meantime, watch for more propaganda pics and videos from the Hamas driven media in Gaza. Recent reports about mosques being hit are just the tip of the iceberg - just ignore the fact that the massive secondary explosions indicate huge weapons caches stored in the mosques. Any day now we'll have another version of Qana II with wailing rescue workers running down the street with children that were dead well before the so-called attack.