Is the Noose Tightening Around Murtha? 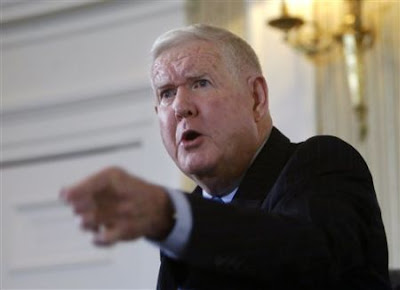 My favorite lying treasonous ex-Marine, John Murtha, is getting some heat about those massive campaign contributions - well at least one of his favorite lobbying firms is getting the heat. Per the Washington Post...

Federal investigators are focused on allegations that PMA founder Paul Magliocchetti, a former appropriations staffer close to Rep. John P. Murtha (D-Pa.), may have reimbursed some of his staff to cover contributions made in their names to Murtha and other lawmakers, according to two sources familiar with the investigation. PMA has long had a reputation for securing earmarks from congressional appropriators, particularly for defense contractors, and it has donated generously to influential members of Congress. Magliocchetti personally gave $98,000 in campaign donations last year, according to campaign records.

Yeah but how does this involve Murtha you ask. Well the WaPo goes even further to describe the "intimate" relationship between Murtha, PMA and some of its clients...

PMA, founded in 1989 by Magliocchetti, a former Murtha aide to the House Appropriations Committee, has enjoyed a high success rate in winning earmarks for its clients, which include such major defense contractors as Lockheed and General Dynamics. PMA also represents a circle of lesser-known but also successful contractors such as Argon ST, MTS Technologies, DRS Technologies and Advanced Acoustic Concepts. Many PMA clients have opened offices in Murtha's western Pennsylvania district, donated generously to him, and received millions in earmarks requested by the congressman.

In the last election cycle, PMA and its clients donated $775,000 to Murtha's campaigns. Last year, those clients received earmarks worth $299 million and arranged by Murtha and his colleagues.

Here's hoping that Murtha goes down real soon but I'm not holding my breath. Heck maybe the heat will finally make him apologize to the Haditha Marines. Dream on baby - dream on.
Posted by Robin at 8:09 AM