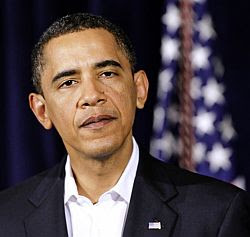 I am so far away from being a fashion critic - give me a pair of jeans and a tshirt and I'm happy - but Obama's attire the past few days has really stuck in my craw.

Okay - so you wait 3 days before you address the nation about the attempted terrorist attack.  So you use the words "allegedly" to describe the terrorist lighting his ass on fire.  You describe this terrorist as "an isolated extremist".  You claim that you will not rest until everyone involved has been captured yet you spent the day on the golf course - again.

I'm willing to overlook the absolute lack of concern or worry demonstrated by the President - for now. Let's face it - his little speech on Monday was absolutely lackluster and lacked any credible emotion.  Even Robert David Jaffe over at HuffPo thought so.  Here's a snip of what he wrote...

"Obama's lack of animation and fire in delivering the speech, to say nothing of his burdening the American people with an outsize role in the fight against terror, showed a shocking disconnect following an attempted terrorist attack."

What I'm not willing to overlook is the way the President choose to dress for such a serious situation.  Open shirt with no tie - what did he think he was doing?  Going for cocktails down at the club?  Jeez Louise - put on a tie at least.  At least give the appearance of giving a crap. By dressing down for the statement, Obama gave the impression that this was "no big deal" - no amount of fancy words would have made a difference.  People's first impression is visual - and the impression we got was a man who had his vacation interrupted by a pesky firestarter.

I've complained about Obama's inability to act like a President - which was only reinforced by his speech on Monday.  But at the very least, he could attempt to look Presidential - especially when discussing the safety and security of the people he took an oath to protect.

(Another great article to read is "Bizarro President" by J. C. Arenas over at American Thinker.)
Posted by Robin at 12:10 AM