I Stand With Arizona 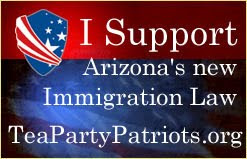 So now Los Angeles - that bastion of morals and values - has decided to boycott Arizona because of the new illegal immigration law.  HMMM... Maybe Gov Jan Brewer can give all the illegals in Arizona a one-way bus ticket to LA and let THEM deal with the issue since they are so concerned.  Wonder how long it will take California to say "enough" and decide to enforce the law?  Probably never but you stranger things have happened - like John McCain saying "finish the dang fence" in his latest campaign ad.

In the meantime, pop over to Stand With Arizona and see lists of products and companies based in Arizona so you can specifically target these companies for your purchases.  And don't forget to drop over here and sign the petition in support of Arizona.

It's time to control the borders - actually past time. I just want to scream "what part of illegal don't you understand?".  Like Gov Brewer said, it's time for the Federal Government to do their job for a change.
Posted by Robin at 12:02 AM