Why Is Islam Getting Preferential Treatment in America? 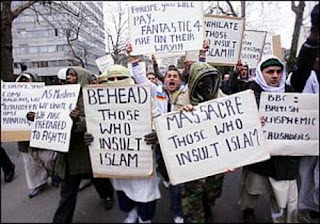 I completely disagree with the burning of the Quran - just as I disagree with burning the Bible, the American flag or killing in the name of a "religion".  This is simply a publicity stunt by a "pastor" looking for his 15 minutes.  It truly serves no purpose other than to incite violence in one form or another.

BUT - what I do have a problem with is all this worry about how the Muslims will react to the burning of the Quran.  Does this mean that we can actually all agree that true Islam is NOT a religion of peace and tolerance? We continually bow to pressure from Muslim groups so as to not hurt their "feelings" but toss Christians aside and label them as "extremists" when they become vocal about their beliefs. Sure we were outraged over Bill Ayers stomping the American Flag in a magazine photo from several years ago - but did you see crazed Americans rioting in the streets and threatening death to Bill Ayers and any of his followers?  And about those christian missionaries murdered in cold blood in Afghanistan - did you see Christians marching in the streets demanding that the DOJ covene a meeting of religious officials to discuss the violence?  Were any Muslims in America attacked in retaliation?

Today Eric Holder and the DOJ held a "conference" with religious leaders to discuss the wave of anti-Islam attacks in this country.  I kept looking at my computer screen re-reading the article and just shaking my head.  WHAT anti-Islam attacks?  The Muslim cab driver was assaulted by a drunk fellow who actually worked in some capacity with the Ground Zero Mosque developers.  The attempted torching of a mosque in Tenn?  Was there this much outrage when churches in Iraq were destroyed?

And to add insult to injury, Kristinn over at FreeRepublic posted this account of PJ Crowley's assinine comparison of burning to the Koran with the attacks of 9/11...

According to the State Department transcript of Tuesday's briefing, Crowley equated the protest burning of the Koran to the gruesome, fiery deaths of thousands of innocents at the hands of Muslim terrorists as he sought to bring public pressure on the church to cancel the protest:


"We hope that between now and Saturday, there’ll be a range of voices across America that make clear to this community that this is not the way for us to commemorate 9/11. In fact, it is consistent with the radicals and bigot – with those bigots who attacked us on 9/11."

So now it was BIGOTS that turned the WTC into dust, slammed into the Pentagon and got their asses handed to them by a group of airline passengers before crashing into a field?  BIGOTS - Dear Martha WTF????

I am appalled but not surpised by Obama and his administration's attempts to bend over to appease the Islamists. NO religion should get preferential treatment in this country.  This is reaching the point of a One World Religion and I'm not talking about Christianity. Why we continue to cater to Islamists is just simply beyond my comprehension.

And while we're at it - I'm against stoning of women and the hanging of gays also.
Posted by Robin at 12:02 AM