Just Discovered - A Rare Breed of Pig-Monkey in a Tree

Scientists have discovered a new species of animal to celebrate the New Year - An actual Pig-Monkey in a tree... 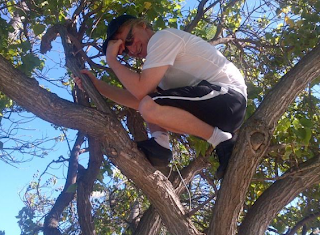 That is the despicable Bill Maher, once again mocking Denver Quarterback Tim Tebow and his faith.  From The Blaze -

Maher posted two back-to-back tweets featuring the now infamous "Tebowing" stance. The first tweet, which read, "TREEbowing Happy New Year everybody and thanks for the 600,000 who joined me on twitter in 2011," featured a link to a picture of Maher Tebowing in a tree (hence the "TREEbowing" reference).

And while we're on the subject of Tim Tebow, here is Terrell Suggs, a linebacker for the Baltimore Ravens, dissing Tebow's faith on the sidelines... (Chickenhawk Express tip o' the hat to The Blaze)

When we play Raven football, it’s scary,” Suggs said during the interview. Then, he went on to claim that his team doesn‘t necessarily need God’s assistance on the sidelines. (snip)

“With all do respect, we don’t pray on sidelines. I mean we do — we give it up to God just to be safe…we gonna go out there and win that game,” he said. “We don’t need our kicker to make a 62-yarder. I‘m just sayin’. I’m just sayin.”(snip)


“Our quarterback — when our quarterback prays he be like ‘You know what guys — you sit on your couch and enjoy this. Thank you for blessing me…letting me wake up to play this game. I’m gonna impress you,’” he proclaimed. (snip)

I personally think it's refreshing to see a young man with so many God-given talents be true to his faith and beliefs.  As a die-hard GA Bulldog fan, I didn't like Tebow in his college football years but only because I was born to dislike anything "Gators".  But his devotion, his firm belief in God and the fact that he is an "unashamed Christian" gives me hope for this world.  Such a great role model for our young people when we are over-run with "hero worship" of thugs and criminals.

We have strayed from our beliefs and public expression of our faith thanks to the PC police.  It's time to return to our faith and turn our lives over to God. And I thank Tim Tebow and his family for bringing some sanity to this insane world. 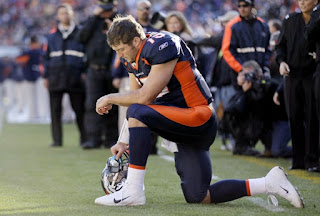