Amazing what you can find with a little digging and an intense desire to find out what really happened...

Remember the AP congratulatory memo to the staff about the pictures taken at Qana? Here's a portion of that memo...

"Rumors surfaced early Sunday morning that an Israeli airstrike had flattened a house in the southern Lebanese village of Qana. The number of deaths wasn’t immediately known, but the seriousness of the incident was clear. Beirut-based photographer Hussein Malla immediately called AP photographers Nasser Nasser, Lefteris Pitarakis and stringer Mohammed Zaatari and advised them to rush to the scene." 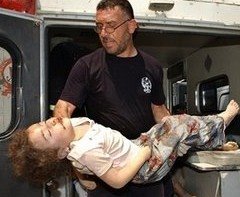 Mohammed Zaatari is quite a busy fellow. Not only is he a stringer for the AP, he is a Lebanese Red Cross Volunteer. From Newsweek...

"Many of the Red Cross volunteers at the bomb site on Sunday sat quietly and looked at the rubble. Mohammad Zaatar, 32, had seen this kind of scene before..."

And then there's this snip from Dhar Jamail's article...
"Mohammad Zatar, the 32-year-old Lebanese Red Cross volunteer I spoke with down in Tyre, after we'd been to Qana, described the scene and the feelings better than I can. "

Zaatari has a lot of experience in rescues and photography at Qana. He was also working both jobs at the first Qana incident in 1996. From the Jamail article...

"I worked to rescue people after the first Qana massacre in 1996," he told me as we stood in front of the Red Cross headquarters. "But this one was so much worse. It was the ages. So many baby kids, unlike last time. Four months to 12 years. Only six adult bodies! Only 8 injured survivors. The rest -- all kids. There were no scratches on the bodies because they were all buried in the rubble. It was a bad scene." 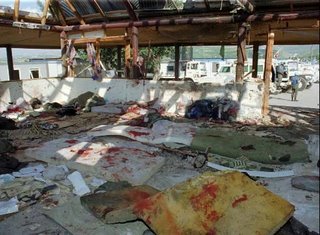 While there is no rule against AP Stringers being Red Cross Volunteers, it definitely translates into a conflict of interest and negates any idea of objectivity in his photography. At the very least, the AP should fully disclose this type of dual role in the interest of honest and ethical journalism. But we are talking about the AP.
Posted by Robin at 12:03 PM