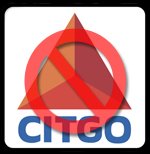 I'm still fuming about Allmyjihad's madman rantings at the UN yesterday. And now to add gasoline to the fire, there is Chavez calling the President of the United States a "devil" while those in attendance at the UN just laughed. Just who does this Castro boot-licker think he is? I did take comfort in the fact that any sane human being who heard his lunatic ravings would realize that Chavez was spouting off Lib talking points. Cindy Sheehan musta worked the hag mojo on him cause he parroted her craziness almost word for word.

But I've decided to channel my anger into something more productive. I am not a big fan of boycotts (except for the Dixie Chicks) but in the case of Hugo I will make an exception. I will no longer purchase anything from any store selling Citgo products. I have no doubt that the loss of my $$ will mean nothing to the Monkey Man but it will give me personal satisfaction. I encourage anyone who reads this to do the same and spread the word.

While we're on the subject of boycotts and Chavez, I'd like to remind everyone of the Americans that have a close working relationship with the man that spit on us today. 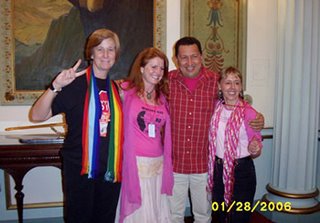 Any time you see or hear Cindy Sheehan, Medea Benjamin, CodePink or any of their affiliated trash, remember this picture. Remember that they knowingly and willingly sided against a known enemy of the United States.

This was not just a photo-op. This was a recruitment field trip. Here's one of the benefits that CodePink got from this meeting...

Among the new endorsers is Venezuelan President Hugo Chavez, who became the 30,000th person to sign on at www.womensaynotowar.org. “There is no stronger force than strong women demanding peace,” said President Chavez, as he met with CODEPINK cofounders Medea Benjamin and Jodie Evans, and “Peace Mom” Cindy Sheehan. “I’m delighted to sign on, and will encourage women throughout Venezuela to sign.”

Here's a few snips of the Chavez worship from his fan club at CommonDreams...

"Rather than demonizing him as a new Fidel Castro and stoking the opposition, US leaders should embrace Venezuela’s social transformation and the way it is empowering people like Olivia Delfino" - Medea Benjamin

"The [Venezuelan] government is making billions of dollars [from its state oil company] and spending them on houses, education, medical care," notes CNN. And--gasp--people's lives are improving. " - Ted Rall

"First of all and most importantly and as far as I can recall, Hugo has not invaded any countries in baseless wars of aggression justified by lies. George has. As a matter of fact, instead of using "Cowboy Diplomacy" and "Bring 'em on" rhetoric, President Chavez has skillfully used his country's resources as a diplomatic tool to make friends and coerce good behavior from other countries." - Cindy Sheehan

"Foreign leaders from Spain and Brazil, Chile and Cuba, have come on pilgrimage to Caracas to establish links with the man now perceived as the leader of new emerging forces in Latin America, with popularity ratings to match." - Richard Gott

And what was the deal with Chavez playing QVC with Chomsky's anti-American screed? Is that a new type of book promotion technique? If so, I'm gonna send mine to Bolton and see if he will wave Quagmire of Hate around at the UN.

For those naive in the anti-American roster of players, Chomsky is one of the most rabid America hating, anti-semitic "intellectuals" in the world. He's also a traitor and pandered to our enemies in North Vietnam in a 1970 Peace Activist tour. Here's a few snips from a speech Chomsky made in Hanoi on April 13, 1970...

Those bonds of friendship are woven of many strands. From our point of view there is first of all the deep sympathy that we felt for the suffering of the Vietnamese people, which persists and increases in the southern part of your country, where the American aggression continues in full force.

"There is, furthermore, a feeling of regret and shame that we must feel because we have not been able to stop the American war machine. More important still is our admiration for the people of Vietnam who have been able to defend themselves against the ferocious attack, and at the same time take great strides forward toward the socialist society."

"But, above all, I think, is the feeling of pride. Your heroism reveals the capabilities of the human spirit and human will. Decent people throughout the world see in your struggle a model for themselves. They are in your debt, everlastingly, because you were in the forefront of the struggle to create a world in which the chains of oppression have been broken and replaced by social bonds among free men working in true solidarity and cooperation."

"Your courage and your achievements teach us that we too must be determined to win--not only to win the battle against American aggression in Southeast Asia, but also the battle against exploitation and racism in our own country.

"I believe that in the United States there will be some day a social revolution that will be of great significance to us and to all of mankind, and if this hope is to be proven correct, it will be in large part because the people of Vietnam have shown us the way."

There it is ladies and gentlemen - Chomsky in all of his hate America glory. This is the author that Chavez worships. Every single Vietnam veteran should receive a copy of this speech. The only way people will see what people like Chomsky, Sheehan, etc are truly about is if we spread the truth. The media is too busy gushing over them. And the UN is too busy laughing at disrespectful comments about the USA to care.