The Sneaky Leaky Snake in the Senate -Updated 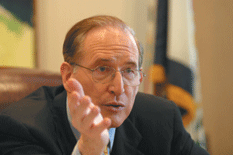 Sen. Jay Rockefeller has no shame. He stands in front of the TV cameras trumpeting a report from the Senate Intel Committee that has already been debunked by de-classified translated documents and the Official 9/11 Commission Report. He blasts the Bush Administration for claiming that Saddam Hussein was an imminent threat but completely forgets that HE was the one that made that claim on the Senate floor.

Every time you hear Rockefeller claim that intelligence was misleading and trumped up, remember who served as an early warning system to Saddam Hussein in 2002. From Fox News Sunday on November 14, 2005...

"I took a trip by myself in January of 2002 to Saudi Arabia, Jordan and Syria, and I told each of the heads of state that it was my view that George Bush had already made up his mind to go to war against Iraq - that that was a predetermined set course which had taken shape shortly after 9/11."

Gee - no wonder Saddam was able to get rid of his WMD's. Rockefeller gave him a head start.

It should come as no surprise that the US Senator that warned Saddam Hussein via a third party of the upcoming attack would now say the world would be better off with Saddam in power. From his CBS Interview...

Rockefeller went a step further. He says the world would be better off today if the United States had never invaded Iraq — even if it means Saddam Hussein would still be running Iraq. He said he sees that as a better scenario, and a safer scenario, "because it is called the 'war on terror.'"

Does Rockefeller stands by his view, even if it means that Saddam Hussein could still be in power if the United States didn't invade?

"Yes. Yes. [Saddam] wasn't going to attack us. He would've been isolated there," Rockefeller said. "He would have been in control of that country but we wouldn't have depleted our resources preventing us from prosecuting a war on terror which is what this is all about."

Maybe you are thinking we should give Rockefeller the benefit of the doubt. After all, he's had lots of back problems lately (which is unique since he's the one throwing knives at people's backs). But then again, there is the little issue of the memo from Rockefeller's office that ended up in the hands of Sean Hannity back in November 2003...

2) Assiduously prepare Democratic 'additional views' to attach to any interim or final reports the committee may release. Committee rules provide this opportunity and we intend to take full advantage of it. In that regard we may have already compiled all the public statements on Iraq made by senior administration officials. We will identify the most exaggerated claims. We will contrast them with the intelligence estimates that have since been declassified. Our additional views will also, among other things, castigate the majority for seeking to limit the scope of the inquiry. The Democrats will then be in a strong position to reopen the question of establishing an Independent Commission [i.e., the Corzine Amendment.]