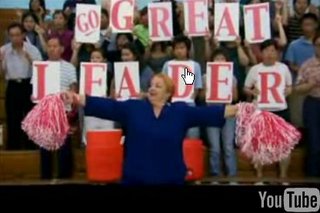 Drudge has posted an exclusive video that was supposed to be an ad for the GOP. Here's how Drudge described it...

The DRUDGE REPORT has obtained an exclusive copy of a "scary" campaign advertisement created by Hollywood producer and director David Zucker that was intended to be used by GOP organizations in the closing weeks of the 2006 campaign.

Unfortunately, the GOP has decided to not use the ad. I thought it was pretty damn funny and is certainly a departure from the stuffy campaign ads we're used to seeing. Watch for yourself and decide. At least we can spread it around the 'Net.
Posted by Robin at 10:23 PM