Do You Want Him As Chairman of the House Judiciary Committee? 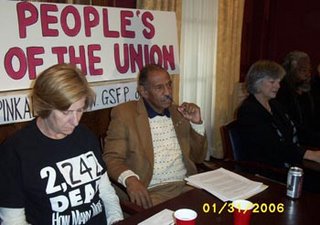 For all those bellyaching about not voting as a means to punish the GOP for not bowing to each and every demand, I thought I would start profiling some of the New House Leaders if the Dems take the house. Hopefully this will make those election-boycotters realize the high stakes in this election...

Congressman Conyers belongs to the radical Progressive Caucus, and in 1969 he was one of 13 co-founders of the Congressional Black Caucus in the House of Representatives. His voting record, according to the progressive Americans for Democratic Action (ADA) tilts left between 90 and 100 percent of the time. According to the 2002 rankings of the National Journal Conyers is the most "liberal" member of the House of Representatives.

Conyers has been a National Executive Board member of the National Lawyers Guild (NLG), which was created as a Soviet front and still embraces its Communist heritage. In a June 1, 1979 New York Times opinion piece he co-authored with Marcus Raskin, co-founder of the extreme leftwing think tank the Institute for Policy Studies (IPS), Conyers asserted that "government's responsibility is to revitalize the nation's economy through creative forms of public ownership" - in other words, through socialism.

Supports renewed military conscription, arguing that the volunteer military disproportionately enlists the poor and minorities. This puts Conyers in the odd positions of being a pro-draft-but-anti-war activist as well as a reparations-for-slavery advocate who favors involuntary servitude.

Conyers is the most prominent lawmaker lobbying to free Mumia Abu-Jamal, the convicted murderer of a Philadelphia police officer. Conyers has been a National

In January 2003 he was the only member of Congress to speak before, and lend his prestige to, an anti-war rally organized by the Marxist-Leninist, pro-North Korean front group International A.N.S.W.E.R.

In May 2002 Conyers was one of 17 House Democrats who voted against a Resolution (HR 392) expressing support for Israel as it faced terrorist attacks that killed more than 600 civilians, including several Americans. The resolution stated that "the United States and Israel are now engaged in a common struggle against terrorism."

Congressman Conyers has also long favored reducing or ending U.S. economic sanctions and travel restrictions against Cuba, for whose Marxist regime Conyers in 1997 helped arrange an opportunity to lobby Congress in lawmaker offices on Capitol Hill.

On March 11, 2003 Congressman Conyers privately convened and invited other members of Congress to a gathering that featured former U.S. Attorney General [also attorney for Saddam Hussein] Ramsey Clark, now associated with the Communist front organization International A.N.S.W.E.R., and more than two dozen leftist attorneys and legal scholars. The purpose of the meeting was to discuss how to impeach President George W. Bush as a way to prevent military action against Saddam Hussein.

On March 23, 2005 Conyers spoke at a Lyndon LaRouche event in Detroit. LaRouche, a former Socialist Workers Party (SWP) organizer and follower of Marxist Leon Trotsky, co-founder of the Soviet Union, later embraced conspiracy theories and held at various times that the world was secretly controlled by Britain's Queen Elizabeth, British bankers, Israel or the Trilateral Commission. The Anti-Defamation League has described LaRouche as an anti-Semite.

Tied for the title as Conyers' single biggest campaign contributor is the Association of Trial Lawyers of America (ATLA), whose members make much of their money by threatening to sue American businesses.

Has appeared at rallies with and in support of Cindy Sheehan

Conyers' ACLU score is 100%. That means that he voted in favor of ACLU supported legislation EVERY time.

At a World Can't Wait rally in Detroit on October 5, Rep. John Conyers made the following remarks:
"To our friends all over the United States, that are doing exactly what we're doing here in Detroit, let's give them a big shout out! Detroit joins you in this great outpouring in which we begin the long and hard fought path to end the George Bush regime in the United States of America. This is the beginning. What we've done is demonstrate that people are aware and sensitive to the fact that we got into a war we should never have gotten into. How can you, when you think about it, how could Iraq attack the United States? The whole thing gets almost ludicrous. In all deference to some of my colleagues, whose naivete is beyond belief, I think they knew what I knew, they knew what you knew, we didn't need a preemptive strike because they had no weapons of mass destruction, they had nothing. We are here today to consolidate our friends who are coming over to our side."

I don't care how pissed off I may be at the GOP, I am not willing to contribute to this POS taking control of the House Judiciary Committee. God help us all if that happens.
Posted by Robin at 11:00 AM