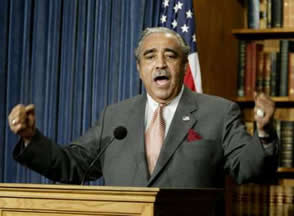 Damn - that "plan" to be more fiscally responsible the Dems campaigned on didn't even last 2 days. The state of New York is salivating at the government cofers being opened to them thanks to their Congressional members. From the New York Times...

And for a state with a long wish list, from money for domestic security to more jobs upstate, the ascendant Democrats in the House and Senate are well positioned to deliver hundreds of millions of new dollars to New York.

Mrs. Lowey estimated that tens of millions more in homeland security dollars could flow to New York if she and her allies succeed in changing a spending formula to favor areas, like the city, where assessments of terrorist threats are strong.

Charlie Rangel, the pompous bag of wind, is relishing the thought of heading up the Ways and Means Committee. He has worked up quite an agenda...

To that end, he sketched out an expansive federal agenda: Teaming up with Mayor Michael R. Bloomberg on gun control [bye bye 2nd amendment rights], passing new tax incentives for urban job programs [more government entitlements for a group that already sucks the $$ out of taxpayers], and redirecting federal money to New York [the 49 other states better start putting up toll booths] in return for the outsize tax collections that the federal government makes here.

Oh and for all of you in Mississippi that are still struggling to get back on your feet from Hurricane Katrina, looks like you're gonna have to move to the back of the line...

“Mississippi gets more than their fair share back in federal money, but who the hell wants to live in Mississippi?” Mr. Rangel said.

Can you imagine the outrage if this had come outta the mouth of a Republican?

Shame on you Mr. Rangel. You can strut your stuff and beat your chest but you will still be nothing more than a 2 bit Socialist shyster who speaks at World Socialist functions and takes trips to Cuba paid for by Castro.

Read More:
Michelle Malkin - "Who the hell wants to live in Mississippi?"
GOP and the City - Up Yours Mississippi!
Lifelike Pundits - Pull His Foot Out Of His Mouth And Look At The Other Things He Said
Posted by Robin at 9:21 PM