SCROLL FOR UPDATES
When will people learn... when you write something on the Internet it is there forever. Several months later when you decide to change your rhetoric, your words can come back and bite you in the ass. Such is the case with Cpl. Adam Kokesh. All this bellyaching about his free speech being stifled by the Marines. All this machismo posturing telling higher ranking Marines to "$&*% themselves" and how the Marines have messed with the wrong man. Yet Kokesh himself admitted back on March 20, 2007 that he violated the sanctity of the Marine Corps utility uniform. From Kokesh's own blog and in his own words...

"I feared that violating the sanctity of the Marine Corps utility uniform would be sacrilege. I think if I was still on active duty right now, and was watching fellow former Marine Sergeant and IVAW member Liam Madden marching though the capitol in his utilities, I probably would have called him a "shit bag". But to not participate when perfectly able would have been to betray myself. In light of the stakes, making a parody of military operations is the pettiest of transgressions."

Kokesh not only fingered his own USMJ violations but he pointed out Liam Madden's (who is also being investigated). Even more damning is his admission that Operation First Casualty was a parody of military operations. But - But - I thought the street theater was an exercise to show people the real situation in Iraq. You mean it was meant as a mockery to the honor of the Marines and the rest of our military fighting in a war? I'm shocked... shocked I tell you.

Now - how can one complain that this hearing is a political witch hunt to silence vets when Kokesh admits to every single violation? Seems that the Marines would be remiss in their duties to not investigate this fella. Next time Kokesh wants to get some media coverage and make a political statement, he should read back over his blog posts first.

UPDATE 1: 6/2/07 1615
Kurt at Flopping Aces has found a pic of Kokesh at one of the Operation First Casualty mockoramas... 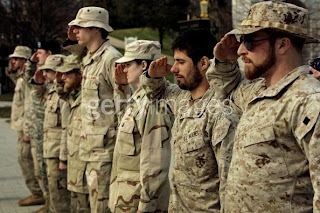 That's Kokesh on the far-right (only time he'll ever be called that). See that little insignia on the left front pocket. That's the symbol for the Marines. It's embroidered into the material and can't be removed...
The USMC Utilities are called MARPAT. Not only is the Birdie on the Ball (EGA) embroidered on the pocket but the EGA and USMC logo are printed INTO the pattern on the material. This is the material. There is NO WAY to remove it. BUSTED!
Posted by Robin at 2:21 PM