This is the uniform that Cpl. Adam Kokesh wore during the protest in question. 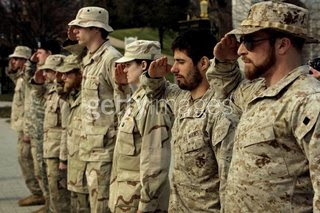 This is the media's story and they are sticking to it...

"...he was photographed in March wearing fatigues _ with military insignia removed _ during a mock patrol with other veterans protesting the Iraq war..."

This is the material that the Marine Utility Uniforms (MARPAT) are made of.

See that little "bird on a ball" and the initials USMC that are made into the pattern of the material?

Is it possible to remove the Marine "logo" from the material?
Nope.

THEN. HE. DID. NOT. REMOVE. THE. MILITARY. INSIGNIA. FROM. HIS. UNIFORM.

Can anyone in the media be bothered to do any fact-checking?

Facts? The media don't need no stinkin' facts - especially when it makes the US Military look like the bad guys.

And how did the media miss the USMC official insignia on Kokesh's hat while he gave his little press conference? UPDATE 1: 6/4/07 1200
The Washington Post's Heather Hollingsworth continues to ignore facts and claim that all identifying military information was removed from the uniform...

Kokesh argues that he was not representing the military at the protest in Washington, and he made that clear by removing his name tag and other military insignia from his uniform.

Hollingsworth also plays loose with the facts in the rest of the article...

sent him a letter saying he might have violated a rule prohibiting troops from wearing uniforms without authorization.

No "Might Have" about the warning in Major Whyte's letter.

Kokesh responded with a letter than contained an obscenity.

Give me a break! He told the Major to go F*#& himself. That's a little more than "a letter than contained an obscenity."
Posted by Robin at 11:50 PM