Scroll for Updates...
We're still waiting for my grandson to make his debut but to add a bit more drama to the waiting game, this grandma to be has a severe respiratory infection bordering on acute bronchitis. So here are some random thoughts on events in the news since my ability to focus at length is severly impaired.

First up - Can someone tell me what planet Ron Fournier of the AP has been living on for the past 6 years? Take his article about the Democratic Presidential wannabes' appearance at YearlyKos. This is how he described the KOS Krowd...

They fielded questions from a crowd of 1,500 bloggers, most of them liberal. The gathering marked another advancement for the rising new wing of the Democratic Party, the so-called netroots.

Most of them liberal? Hah - that is an understatement. More like 99.99% uber-liberal. And it's not the "netroots" at KOS, it's the NUTROOTS. And despite Fournier's insinuations of this being a "new found" voice in the political realm, remember that Mr. Kos was a paid shill for Howard Dean back in 2004 but didn't disclose it until forced to. AND his partner, Jerome Armstrong, was part of Mark Warner's "exploratory" campaign.

This is the most absurd part of Fournier's piece...

Markos Moulitsas Zuniga, founder of Daily Kos and spiritual leader of the convention..

Spiritual leader? More like Cult Leader. Lame attempt by Fournier to lend some mainstreamedness to this convention of crazies...

*******
The Washington Post has a piece today in the Baghdad Journal titled "A Week in the Death of Iraq" by a Dr. Mohammed. Now far be it from me to question the Washington Posts' sources but gimme a break. Dr. Mohammed? How generic a name is that? The only identification provided by the WaPo is a blog and an email address.

According to several other Iraq Bloggers, Dr. Mohammed is a relative of another Iraq Blogger. Since when is it appropriate or ethical journalistic practices to use anonymous bloggers as the sole contributor of a piece other than "opinion"? Was this blogger vetted to ensure that he truly is who he claims?

The very least the WaPo should do is provide a caveat that Dr. Mohammed is an anonymous blogger and as such the claims were not verified. Until there is verification, this should be considered a piece of creative fiction.

UPDATED 8/7/07... Thanks to input from others posting comments I've learned that Dr. Mohammed is a real blogger in Iraq. So I apologize for labeling his article as "creative fiction". But the WaPo should make sure that a writer's bona fides are listed with their articles. With the track record of the media and TNR's recent fables I guess I jumped the shark. I'll be more careful from now on - wish the media would do the same. 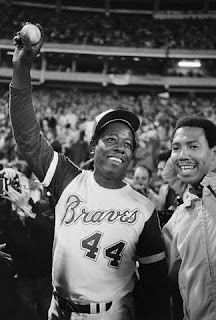 So Mr. Steroid has tied Hank Aaron's homerun record. Excuse me if I don't share in the joy.

I grew up watching Hank Aaron. We would go see the Braves play at least once a year when I was a kid. I still have some of the old programs from the game. I remember watching Hammerin' Hank come up to the plate praying that he would hit one outta the park so Chief Knock-A-Homa would come out of his teepee.

We were watching the Braves on TV the night Hank hit his record breaking homerun. My mom still has the Savannah newspaper with the headlines screaming the record breaking feat.

Hank Aaron will always be the homerun king. He broke records at a time when the bats were not corked and the game was "pure" as were the blood tests of the players.

I will always remember Barry Bonds as the petulant brat who threw his glove down when Sid Bream hoofed it around the bases on October 7, 1992 and sent the Pirates home. Barry Bonds is not worthy to even sit next to Hank much less take the homerun crown from him.
Posted by Robin at 12:51 PM