Al-Jazeera - A Fully Credentialed Media Outlet for US Military? 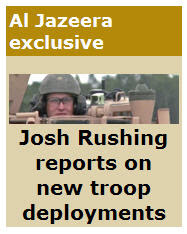 I found out about this report on Al-Jazeerah from SG over at Sweetness and Light. After I watched the video of the report that was broadcast on Al-Jazeerah, I was outraged. The ex-Marine, Josh Rushing, was on the base at Ft. Stewart and filming our soldiers readying for deployment. What the hell is Al-Jazeerah doing on a US military base filming a report for their "evening news"?

I promptly emailed the press liason at Ft. Stewart wanting to know why Al-Jazeerah had access to our military bases, was able to film goings on at the base and report on US troop deployments. I figured the email would just get blown off. A few days later I received this response from Kevin Larson at Ft. Stewart.

Al-Jazeera is a credentialed media outlet by both the Department of Defenseand Department of State. The outlet is treated as any other international news outlet. Rest assured that operational security is always priority when it comes to interacting with any and all media, regardless of where they maybe from.

If you have any further questions, please don't hesitate to contact us.

Say What? Al-Jazeera is a credentialed media outlet by the DOD and State Dept? Has the world gone mad? I appreciate the reassurance that "operational security" is a priority but come on - Al-Jazeera? Has political correctness just eaten away at all common sense in this country?

I fired off an email to the DOD and State Dept. I will let you know if I receive a response. Or you can just watch Al-Jazeera to find out more about troop deployments...
Posted by Robin at 10:46 PM