Anti-War Leaders: Winning By Losing is the Name of the Game 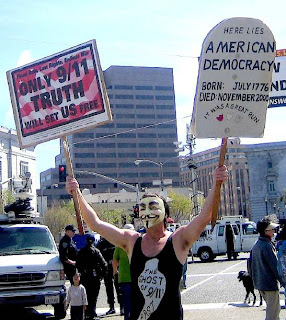 The media has reported about the connections and teleconference consultations between the Democrats in Congress and the anti-war crowd. But rarely have we gotten a view of a strategic planning session between various factions of the "anti's". Until now...

The transcript is long but truly a worthy read. It gives you quite an insight into the "belly of the beast" and just how far from reality these people truly are. You also get an idea of the true agenda of this group and why it is necessary to prevent the Dems from ever getting back into the Oval Office.

Here are a few of the more interesting little tidbits from the transcript. Maybe this will whet your appetite to go read the whole thing...

"The Triad" - this is the 3 Amigos of the Progressive Caucus - Rep Woolsey, Rep Barbara Lee and Rep Maxine Waters. Sounds like something out of a John Grisham novel.

The new theme for the anti-war legislation - "funding orderly deployment". This is how Woolsey describes it -

Tim Carpenter of the Progressive Democrats of America echoed the sentiments of Osama bin Laden...

This seems to be unlike May. This is the line in the sand vote. We in PDA should make it clear that if there are Democrats who are on the wrong side of this one, that there will be primary opposition when they seek their own renomination as the Democratic candidate for Congress. This movement has now drawn the line. If they’re not with us at this point in time, then we need to keep upping the ante from our end, to communicate to those Blue Dogs and those moderate Democrats the political consequence of this vote.

Woolsey is willing to lose the majority in Congress to make a political point...

I think that’s a good idea, Tim. I’d hate to lose the majority, but I’m telling you, if we don’t stand up to our responsibility, maybe that’s the lesson to be learned. I don’t know.

This is rich - they want a Global Marshall Plan to fund peace so we can all just get along. You know how easily swayed those butchering jihadists are to tea and crumpets...

We want our Congresspeople, and all the people who shape public opinion to begin to take seriously the notion that homeland security could be better achieved through a Strategy of Generosity rather then a Strategy of Domination. war to protect ourselves is by dominating others.

The Right says that you dominate through the military, but the liberals often say no, we can dominate through a variant of that, "soft power," namely through economic and diplomatic means. Those are code words for domination as well.

Specifically, that leads us to advocate for a Global Marshall Plan, and our call to dedicate between 1 and 2 percent of the GDP each year for the next twenty, for the purpose of eliminating global poverty, homelessness, hunger, inadequate education, and inadequate healthcare, both domestically and abroad.

The brilliant strategist and political heavyweight Rep Jim Moran offered his two cents worth based on his recent visit to Iraq...

The military is performing well, and that’s what Petraeus is going to say. The result of the military success is going to be wholly inconsistent with our values, and certainly unworthy of the sacrifice of our military families.
I personally think we put too much money into the military, but any way you put it, the end result is going to be Shiite theocracy that is suppressive of woman’s rights, human rights, and is closely aligned with Iran, with the most conservative elements of the Iranian government
So I won’t go into that any more, but I’m just saying that the end result, even if we are successful, is not anything we could ever be proud of.

Moran recommended other more important ways the money allocated for the Iraq war could be sent...

With the 450 million dollars we are spending everyday now in Iraq, we could transform New Orleans, and rescue it and make it a city we could be proud of. Instead we’re rebuilding Baghdad, and Mosul, and Tikrit and I call tell you that the Iraqi people are not appreciative.

Moran is going to make the following recommendation to his BFF, John Murtha...

Now, to talk about strategy: I’m going to recommend that Mr. Murtha reject the 50 billion entirely, take the 14 billion, and use it solely for withdrawal purposes.

Moran goes on to do a replay of Chuckie Schumer's anti-troop rant...

It hasn’t been discussed, but it’s a principal the Sunni sheiks have turned against Al Qaeda in Anbar province. We’re taking credit for it, which is fine, but a lot of it is a reflection that this is a secular society, and all least the Sunni wont tolerate the Talibanization of their villages.

Code Pink's attack dog, Medea Benjamin, couldn't resist whining about how Nancy Pelosi refused to bow to the sit-in's and hunger strikes [because they have always been so succesful (snark)]...

I still don’t understand the strategy. I’m in Nancy Pelosi’s district. We’re been doing a hunger strike, a campout outside her home in August—she wouldn’t even have a meeting outside with any of the peace groups—she said when she became speaker that defunding the war was off the table, so you might feel like she’s with us at heart, but we don’t fee like it out here

But the gem in all the bloviating and machinations was this...

She needs to understand winning by losing: That if we can get that stand-alone vote, and even if we end up losing it, that if we move it from 171, even if it’s to 175, that we’re winning.

So it's not just "Speaking Truth to Power" or "Fake but Accurate". It's now WINNING BY LOSING. Quite a concept. Sounds like the perfect motto for the Libs and the best slogan ever for thier Iraq War plan.

(Picture above from one of the "Winning by Losing" rallies courtesy of Zombie)
Posted by Robin at 10:49 AM