Good Grief - The Dems Have Finally Gone Over the Edge - UPDATED 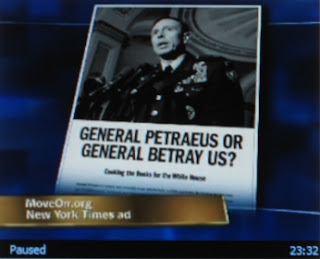 UPDATE: Due to MoveOn.org's completely juvenile full page ad in the NYT today, I'm bumping this post to the top...

Originally posted 090607...
WOW - talk about going completely over the edge... The Dems have officially lost touch with reality. Case in point - The Petraeus Report is an Impeachable Offense from Democrats.com. Key point here - The Downing Street Memo tells them so...

Before the war, the Bush-Cheney administration repeatedly claimed Iraq had WMD's and ties to Al Qaeda. Both of those claims were fraudulent but were deliberately promoted by George Bush, Dick Cheney, Condi Rice, Donald Rumsfeld, and other top officials. We know these lies were deliberate thanks to the Downing Street Memo, which revealed that "the intelligence and facts were being fixed around the policy" of invasion three full months before George Bush asked Congress to authorize the invasion.

But after over 4 years of a disastrous occupation, Bush and Cheney are lying again. The current lie is that Iraq is making "progress" towards the benchmarks that George Bush himself set in January 2007. These lies will be delivered to Congress in highly-publicized testimony by Gen. David Petraeus. That testimony will be approved personally by George Bush, who must sign it according to the law that mandated the report.

And if that wasn't enough, read this little gem from the "BetrayUsReport". Yes - you read that right. They have stooped so low that they are calling General Petraeus "General Betray Us". Now that's class... But they can't seem to make up their minds cause they are calling it the Cheney Report. (the strike throughs are their own)

The war criminals and their enablers in Washington DC - both in the Corporate Congress and the Corporate Media - are waiting breathlessly for the Petraeus Cheney Report on the achievement of Bush's January benchmarks for Iraq to justify throwing yet another $200 billion into a living hell.

But if the preliminary Petraeus Cheney report is any indication, the final report will be full of lies, as emptywheel points out.

Here's a comment from one of the unhinged unhinged that about sums it all up...

General BETRAYOUS told the conservanazi republikan caucus what he was going to report BEFORE HE EVEN WENT TO IRAQ. GEN. BETRAYOUS IS A CONSERVANAZI STOOGE THAT WANTS TO KEEP THE conservanazis IN POWER.

UPDATE: Fox News has an article up about the ad. Eli Pariser's response to the complaints was basically "so what". Here's what Sen. Reid had to say via his spokesman...

"The issue isn't General Petraeus," Reid spokesman Jim Manley told FOX News. "He is a good man and a fine soldier. The problem is that he was brought in to administer a war that had already been badly mismanaged by President Bush."

No surprise there. No condemnation of the ad but a big dose of BDS.

Duncan Hunter who was on fire at the hearing this AM released this statement...

"General Petraeus is an American soldier. His professional life is a reflection of adherence to duty, honor and country. For the Democrat leadership to allow this slur by their ‘Move On’ allies to stand would be a slap in the face of every member of the Armed Forces. I call on the leadership of the Democrat Party to denounce this advertisement and disassociate themselves from it," said Hunter, who is the top Republican on the House Armed Services Committee."

Updated... Also commenting on the beyond reprehensible ad in the NYT...