Don't expect to see this touted much in the mainstream media. A delegation of leaders from al-Anbar province stopped to visit with members of the Vermont National Guard and thanked them for helping secure Iraq.


The Iraqi delegation, fresh off meetings in Washington with President Bush and Secretary of State Condoleezza Rice, declared they had achieved victory over al-Qaida insurgents during a visit with Vermont veterans at Norwich University Thursday afternoon. Though insurgent violence is largely quelled, they said, continued U.S. support is necessary to rebuild infrastructure and the economy in Al Anbar province.

The Iraqi delegation told veterans they would look to the U.S. as a model in crafting their own unity government.

When the reconstruction is complete, the Iraqis said, Vermont veterans will be their guests of honor.

Said Al-Essawi, "We will welcome you and your families to come and visit Iraq"

You can see a video of the meeting here.

The delegation met with Sec of State Condi Rice and President Bush back on November 1 but the media has been very quiet about this. Here's a picture of Madame Secretary with the delegation... 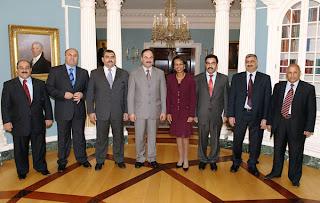 The delegation, selected by the US Embassy in Baghdad, includes the head of the Anbar Awakening Council Sheikh Ahmed Abu Risha, Anbar Governor Maamoun Sami Rashid Al-Awani, Ramadi Mayor Latif Obeid Eyadeh, Chairman of Anbar Provincial Council Abdul-Salam Abdullah and three other members of the council, in addition to the Iraqi Minister of State for Foreign Affairs Rafeh Al-Issawi.

Sadly the above news snippet came from a news outlet from India. But who is shocked at the failure of the media to report such great news? Anyone... anyone...
Posted by Robin at 12:42 PM