SCROLL FOR UPDATES
My heart is beating outta my chest right now. There was an explosion and fire at the Savannah Sugar Refinery this evening. Reports at the scene are over 200 injured some critically injured with severe burn injuries. My stepson works at the Refinery but Thank God was off duty when the explosion occurred. He was called in to assist and remains on the scene. There are no official reports but witnesses on the scene report some fatalities at the site.

Please keep our community in your prayers. This is one of the big employers in our area and was running with a full shift of workers at the time of the explosion.

Update 2226: Ten critical burn patients are being transported to Augusta Burn Center. The building is still on fire. Partial collapse of the floor in the "bagging area". No official reports of fatalities but my stepson says otherwise. Nine are believed to still be trapped in the building. Police are reporting 60 people unaccounted for but they may have left with minor injuries. Here's another pic....

Update 0830: Local media reports say 19 people have been transported or are in transit to the Augusta Burn Center. The trauma surgeons report those transported to Augusta have at the very least burns over 25% of their body. There are approx 40 people hospitalized at local hospitals with burns, broken bones, etc. According to firemen on the scene (remember my hubby is a retired Capt with Savannah Fire Dept), the building is still burning and the damage is massive. The media are reporting 6 or 9 people still missing. From all the firsthand reports we've received, there are some fatalities.

Things are still chaotic - traffic blocked which impacts the flow of trucks to the ports, water pressure problems, etc. I have to commend the local television media especially the CBS affiliate, WTOC - they pre-empted Survivor and stayed on the air with live reports until about 1am. They tempered the outrageous initial reports with words of caution. As a medical professional, I was impressed with the Emergency Response in the area including the mobilization of resources.

Will update as news filters in. Keep all those involved in your prayers including the rescuers still on the scene.

UPDATE 1130: Fox News is reporting that 3 bodies have been recovered from the Sugar Refinery. There are at least 3 people still unaccounted for. At a press conference earlier this AM, the Police Chief called this a recovery operation, not a rescue. The building is so unstable that the firefighters are having a difficult time getting to any possible victims. The fires are still burning.

According to an eyewitness that called us this AM, the top of one of the sugar silos was blown across the river in the explosion. This explains why the search was focused on the river last night. The Coast Guard is still searching the river today.

Three choppers from Hunter Army Airfield assisted in transporting victims to Augusta Burn Center. As always, the military jumps in to help out.

My stepson stopped by a little bit ago and gave us some details about what he saw last night. It was horrific and devastating. He helped evacuate the injured from the building to the maingate for triage and transport. He teared up just telling us about it. My heart was breaking. These are his friends and co-workers and part of our community. Please keep all involved in your prayers.

UPDATE 1200: News reports are now out saying that 6 bodies have been recovered and as many as 17 may be missing. Here is one of the latest pictures of the Sugar Refinery from WTOC. 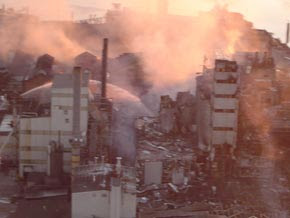