And you thought Rev Jeremiah Wright and William Ayers brought a new stench to Obama's background... Melanie Morgan has uncovered CodePink ties to Obama and his campaign...

A radical anti-American activist who has also supported Fidel Castro's regime in addition to Hugo Chavez, Jodie Evans' ties to Barack Obama first appeared in reports from the Federal Elections Commission, or FEC, which showed that Evans gave the maximum amount allowed by law to the Obama for America campaign committee in February 2007. You can see the FEC filing here.

We are now learning that Evans was also a relentless leader in the back-room effort to steal away Hillary Clinton's Hollywood supporters, by pressuring them with the rationale that Clinton was too willing to support the missions of U.S. troops in the war on terror.

"Hollywood sees someone who has charisma and who is a leader. That is what Hollywood has always been able to see. He's kind of a cross between Jack Kennedy and Martin Luther King." (Jodie Evans, quoted in Variety magazine – Feb. 20, 2007)

And let's not forget how CodePink stalked Hillary at every campaign event and
speech... HMMM was this some backdoor Obama campaign deal? Who knows but one thing I do know - pictures of Jodie Evans with her favorite dictator, Hugo, won't fly well among those "bitter" Americans. 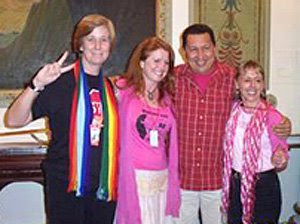 That's Jodie sandwiched between Hugo and Sheehan. No wonder Obama is so willing to sit down with dictators like Chavez - he's already got someone on the inside to lend him a hand... a PINK hand.
Posted by Robin at 9:39 PM