Another Smackdown For Murtha 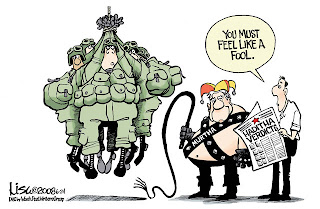 The Canada Free Press has one of the best smackdowns EVER for fat-Jack Murtha. Here's a few of the more colorful snips...

You’ve brought incalculable anguish upon the parents, spouses, siblings and children of eight innocent men based on nothing more than enemy propaganda planted by a Sunni agent of al Qaeda. And while you were busy trying to kill the rest of our military in Iraq; starving them of food and ammunition by tying up war funding with a morass of beaurocracy; people like me were busy listening to the anguished father of a Marine as he poured his heart out over the injustice perpetrated against his son.

**********
You gave credence and momentum to the anti-war movement and aid and comfort to our enemies. You chummed the waters and began the feeding frenzy that would irreparably taint the cases and reputations of all eight men. The international media hung on your every word.

***************
Until you lied, Democrats were stalemated in their efforts to end Iraq war. Every attempt to bring our forces home failed. But then you came along; a decorated [1] Marine, with one of your many half-baked ideas to end the war; and in a scene reminiscent of another traitor, Senator John Kerry, you told some whoppers about US combat Marines going berserk in order to exact revenge for the imaginary bombing of their convoy that somehow killed one of their fellow Marines.

Go read the whole thing - it's one to save. Kudos to Jayme Evans, U.S.N(Ret.) for writing such a masterpiece.
Posted by Robin at 12:02 PM