I saw one of the pink-clad hags getting dragged off last night during Palin's speech and figured it was Medea. But little did I know that Obama's bundler, fundraiser and supporter was also involved in the attempted disruption. Yes that was Jodie Evans. Here's a pic from the Code Pink flicker album... 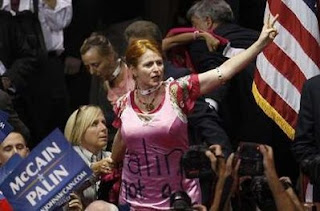 And if you still have doubts, here's the blurb from the Code Pink press release (you know that they don't do anything without distributing a press release)....

ST. PAUL — Two activists of the women’s peace group CODEPINK disrupted Sarah Palin’s speech tonight at the Republican National Convention when they approached the stage where Palin was speaking, adjusted their clothes to reveal pink slips that read "Palin is not a woman’s choice," stood there at the side of the stage for about a minute and yelled "Women say no to war!" and "Women need a vice-president for peace!" They also removed banners that read "Women need a peace vice-president."

Co-founders Medea Benjamin and Jodie Evans, who were given their tickets to the speech by a Republican delegate who was frustrated with the Republican party and Sarah Palin, caught the attention of Palin with their banners and shouting about 15 minutes into her speech. Palin stopped talking for a moment to turn to look at them.

And the GOP delegate who gave these two lying sacks of Michael Moore her credentials...

Ann Echrich is an alternate delegate and RNC contributor

So how long before Obama condemns the actions of one of his very own? Ummmm - never - because they do it with the tacit approval of The One himself. Can't get his hands dirty but his minions have permission to trash away. Wonder if the MSM will bother to report this bit of a flip-flop? Yeah, I know... when pigs fly.

BTW - here is a priceless pic of Medea getting "escorted" out of the Excel Center. How many of us have longed to do what this secret service agent is doing? Frankly I wish they would take the Pinkos down with a flying tackle. 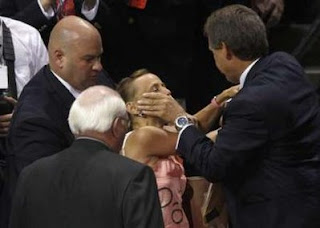 Mega chickenhawk express salute to Jonn over at This Ain't Hell for the heads up! Jonn is always right on top of the news!

Oh - and here's a comment on the CodePink press release blog that should give you a hint about Obama's supporters...

Woo-hoo! WAY TO GO, CODE PINK! Show that fucking breeder bitch and her retard baby that if she doesn’t drop out of this race she’s in for a thumping! Back to Alaska, you small-town loser!